By this time in the campaign season, the candidates should have their stump speeches perfected and not have any onstage jitters at the many events in which they have given just a few minutes to speak and have to make a quick, favorable impression.

Of course, with just seven days left before the primary, most of those who attended the watermelon feed at Big Spring Park in Neosho Tuesday night probably have already decided who has earned their vote. For most of the candidates that means making sure you don't lose any votes or say something that can be used against you in the future.

Six of the eight Seventh District Congressional candidates had successful evenings to varying degrees. Probably the best showing was provided by Sen. Gary Nodler, who thrived in his hometown. He began with a description of the importance of Big Spring Park to him and steered his speech skillfully to his point that it is time to reclaim America. 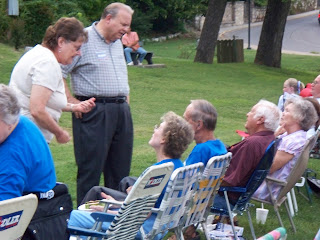 It was also a good showing for Sen. Jack Goodman, R-Mount Vernon, who did nothing to slow the momentum that has him sitting in good shape for next Tuesday. Goodman did not stray from the same stump speech he gave at Carthage and Joplin the past two weeks, but he has learned how to work a lot of good points into three minutes.

Billy Long was also on top of his game and struck a resonant note with some of the crowd with his contention that it is time that Republicans stopped awarding nominations to the one whose turn it is and bring some new blood, namely a businessman like Billy Long, into the mix.

It was a solid performance for Greene County Prosecuting Attorney Darrell Moore, who seemed to enjoy the outdoor setting and emerged as a thoughtful alternative.

I am still looking at Jeff Wisdom as a solid candidate for some other post sometime in the future, which is probably unfair to him. He has had to speak first because of his place on the ballot at the three events I have covered and each time he has made a winning impression. People appreciate his service to his country and his passion to continue to serve it in a different role.

The other winner was Michael Moon, who was in his element, and brought a bit of humor that the crowd seemed to enjoy with his daughter and her friend wearing Michael Moon mustaches and handing out campaign literature. Moon takes his candidacy seriously, as he should, but he is also taking time to enjoy the campaign, an approach that might make things easier on some of his opponents. 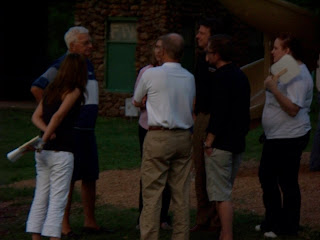 It was not a good night for Michael Wardell, with the last minute of his three-minute speech breaking down into one of the most bizarre conclusions I have ever seen, complete with numerous references to his "nine years younger" wife (as if that was something unusual) and a strange reference to getting what you want at the point of a gun.

As for Steve Hunter, well, he was Steve Hunter. He seems to thrive on making outrageous comments and is perhaps just bidding farewell to his political career. His encouragement to the crowd to vote for one of the other "good candidates" if they didn't vote for him, would indicate Hunter has a realistic outlook on his chances for next Tuesday.
Posted by Randy at 11:33 PM

I heard Wardell and I'm not for him, so don't jump to conclusions. I thought his 3 minutes was 'good' but not his best. But if you want to jump on him for loving his wife you look foolish. You praise everyone but him, again you look petty. But then again, it's your blog and you do write for the 'KOS' and can say what you want.