Joplin Police incident spotlights may return, but probably without any personality 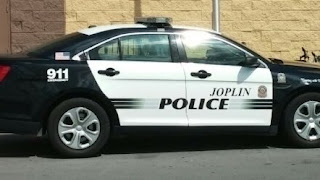 It appears Joplin Police Department incident reports will return, but not in the form Joplin residents looked forward to reading each day.

While a majority of the City Council appeared to favor the continuation of the incident spotlights, City Manager Sam Anselm made it clear that when and if it makes a comeback, it won't have the flavor that was added to it by Capt. Trevor Duncan.

"My concern overall with the incident spotlights, yes, they provided valuable information to residents, but it's not our organization's role or responsibility to entertain our residents at the expense of some individuals who are going through some pretty rough times," Anselm said at Tuesday night's council meeting.

While Anselm would have a point if Duncan were naming the people who were involved in these incidents, he has not done so, except in cases in which the charges were of a more serious nature and would have been included in traditional Police Department news releases.

What Duncan has done with his incident spotlights, and what has been done with similar releases in police departments across the United States is to turn police officers into relatable human beings, explaining both the serious, humorous, and in many cases so bizarre and pathetic things that happen to police officers in the course of performing their duties.

Hopefully, when the new guidelines are handed down, the incident spotlights or whatever comes of this will not have the dry sameness that so many government news releases have.

If that is the case, then they will no longer serve their purpose.

That would be sad and another example of city leaders not knowing a good thing when they read it.

I will definitely be voting against this city administration come election time! Let your voice be heard at the polls, people. They have made a complete mockery of our town with an overly apparent disregard to the tax payers who pay their salary.

He's an idiot. Getting the whole town to turn against him as he defends th criminals and blatantly ignores the citizens of joplin. When is he up for reelection? We'll make sure he won't hold that seat any longer than he has to.

Mr. City Manager, please reconsider your position on this issue. Notice I did not say immediately reverse. By taking "personal" emotion out of a decision to possibly reverse a previous decision you may foster a more "personal" connection with your constituents. As a previous manager myself who sometimes made less than popular decisions, I came to realize that a few were made hastily in my effort to be proactive and productive. It was humbling and yes, sometimes painful both personally and professionally to realize through subsequent discussions that I could make a less than informed decision. After consultation with other communities who employ similar public notifications you may see that public awareness and city government support outweighs your concerns. If not, then indeed certainly make your position and enumerated points supporting discontinuance of said notifications within the public forum. You serve the communities best interests and personally I support our city leaders; however, I urge you to personally and professionally reflect on this situation once again.

Anslem needs to focus on his job which is to operate the City in a productive manner. He doesn't need to micro manage the police department.
Focus on getting all these riduculous torn up roads completed, bringing industry and growth to the city, preventing corruption in our city government, and maybe lookibg into a state/federal funded drug rehab facility right here in Joplin to combat our continuing drug problem. Also what about turning some of these empty schools/buildings into temporary housing facilities for the homeless?
I believe that should keep him occupied for the remainder of his time in office.

So Many Things he could be working on to better our community instead of worrying about the JPD posts.

Jennifer, the city manager position os hired by the city council. It is not an elected position. He serves at the will of the council. It starts with electing the right council members and then holding them accountable.

We need a new City Council.
Remember that at election time.

A big idiot definitely against this A**Moneky