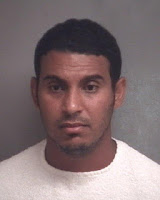 A 10 a.m. March 1 preliminary hearing has been scheduled in Jasper County Circuit Court for Hossam Amin, 35, Joplin, who is accused of beating his 10-year-old son September 13.

According to the probable cause statement, the 10-year-old's sister Joplin police officers that the beating occurred after Amin learned that the boy had said a bad word at school two days earlier and had lied to him about it.

Amin "kicked (the boy) in the stomach, hit (him) several times and used a phone charger to hit (him) which resulted in bruising on his back," according to the probable cause statement, which also indicated that in the past Amin had pointed a loaded gun at his children "threatening to shoot them and used a taser on all three of them."

Amin was charged with felony child abuse and is free after posting a $5,000 bond.

Lock him up like the animal he is. I hope he gets a very lengthy sentence.

Why in the hell would they let him out

The system is about protecting the criminal