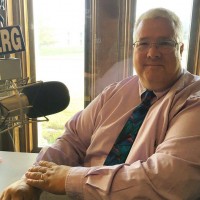 "The honorable Dean Dankelson lives in Carl Junction in the same neighborhood as the victim's family.

"The defendant understands that the judge, as a neighbor, has a personal relationship with the victim's grandfather and said grandfather was a supporter of the judge's judicial campaign."

Dankelson will rule on the motion prior to a scheduled arraignment 8:50 a.m. Monday. In Missouri, attorneys are automatically granted one change of judge, but if a judge recuses himself for cause, an attorney retains the option to ask for another change of judge.

Dankelson's relationship with McPherson is problematic because of allegations made in Jasper County Children's Division documents that McPherson interfered with the investigation into his granddaughter's death.

Though it is not mentioned in the change of judge motion, the Children's Division documents allege that McPherson already attempted to influence a judge shortly after Jayda Kyle's death in a situation concerning the custody of Jayda's brother.

When McPherson found out another relative of the boy would get custody instead of him and his wife, he did not take it well, according to the report:


When informing Judd of the current situation, he first asked who the judge was who signed the order, then he stated he would be getting that changed and ended the call.

The autopsy confirmed she had abusive head trauma.

Jalen Vaden, who remains in the Jasper County Jail without bond, was the live-in boyfriend of Devyn Kyle, Jayda's mother. He is charged with second degree murder and felony child abuse.

Some thoughts on the Joplin Globe's article on the Jayda Kyle murder investigation
Probable cause: Carl Junction man abused three-year-old, left her on the floor bloody, unconscious

Nothing happens in a vacuum. Why hasn't the Mother been charged?

Joplin! This case has got to be moved to another jurisdiction if it's got any chance at all. Our area is as corrupt as hell. This judge is Judd's freaking neighbor and I'm sure they've had fast food together. If I had to guess, they often share the baconnater. No, I'm not saying they share a value meal but they usually get the same thing...supersized of course.

This area is horrible! I've got to GTFO!

Is it Dankelson or dingleberry?

3:10 - They are neigbors like you indicated and probably so much more.