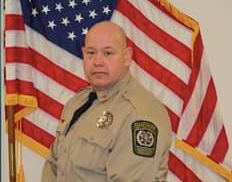 A former Newton County deputy sheriff is being held without bond on felony child abuse charges after his two-month-old daughter was taken to Children's Mercy Hospital December 19 with severe bleeding on the brain and abusive head trauma.

Kenneth R. Rush, 51, Joplin, pleaded not guilty January 10 during a video arraignment before Judge Joseph Hensley in Jasper County Circuit Court. His next court hearing is scheduled for 9 a.m. January 31.

The allegations against Rush are detailed in the probable cause statement from the Joplin Police Department:
On December 19, 2017, Kenneth R. Rush's two-month-old child was taken (to) the hospital via EMS due to having breathing problems and what was believed to be a seizure.

Once at the hospital, (the child) was seen to have bleeding on the brain. Hospital staff decided to have (her) flown to Children's Mercy in Kansas City for further treatment.

Once at Children's Mercy, (she) was found to have too numerous to count intraretinal and preretinal hemorrhages.

Once those results were found, the Children's Mercy SCAN team was contacted to consult and further treat (the child). Medical staff with Children's Mercy advised the injury to (her) eyes was a result of non-accidental abusive head trauma.

Throughout the duration of the investigation, Mr. Rush acknowledged he was the cause of the injuries to (the child), however, Mr. Rush's explanation of what had happened to (her) while (she) was in his car changed several times from nothing happened to he tripped and fell while holding (her) to he was tossing (her) in the air and catching (her) and finally to he was bouncing (her) while (she) was laying on the couch.

Rush, a 14-year law enforcement veteran came to the Newton County Sheriff's Department in February from Bates County. He began his career with the Butler Police Department in 2003.

Wow! Two months old!
What in the world happened?

Where was the Mother?

How is the baby??

Seriously? A mother is suppose to spend 24/7 with her baby. She can't leave her 2 month old alone with the father, a police officer?

Regardless what a POS and I'm sure he probably beat on the mother as well ... Have fun in prison .. except all cupcakes , u deserve them .

It is shameful! Two months and likely life long difficulties due to this. What is wrong with these people harming or killing their children? How can you look at a little human and think it's okay to hurt them? He's a cop, SO WHAT, he's a despicable human being and should face the full WRATH OF THE LAW. Time for change.

this question is stupid. As a mother, I don't spend every second with my child. It's unhealthy to not take time for yourself as wel this mother was doing that. She left her child with the person she thought she could trust to have a 30 minute break. She wasn't home at the time he hurt her baby.

The baby is home with her mother. She is doing well considering all that has happened. She does have some problems she'll have to face later on but her momma has the best team of doctors and therapist to help her out.

He's in jail. The mother left him as soon as she knew what happened. Thankfully he'll never be given the chance to abuse the mother or child again.

He was a dirty cop in Bates Co I am not surprised. Praying for baby girl

He had a history of anger management issues, numerous complaints while working in bates county. Was fired from butler pd for having sex with a citizen while on the clock, in uniform, and driving city car, as were other officers with same local whore. He is a disgrace to those that put a uniform on and truely respect others.

Beyond just a dirty abusive cop

I just hope the mother and child can get counsel now and in the future because they are having to deal with on a daily basis. Congrats to her taking the kid and herself in a better environment, it does get better. As for him put his ass in general populations and let the system get him for child and spouse abuse.

Never liked him. Not surprised. He deserves everything he gets. Love and prayers for Emersyn.

So glad to hear. Now on to healing!