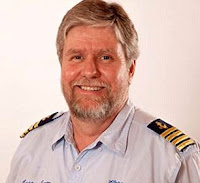 Duck boat captain Kenneth Scott McKee, 51, Verona, pleaded not guilty today in U. S. District Court in Springfield to misconduct and negligence charges in connection with the deaths of 17 people July 19 on Table Rock Lake.

During a seven-minute hearing, Judge David Rush released McKee on an appearance bond. The government did not ask for McKee to be held while awaiting trial.

The following information was included in a news release issued November 8 by the U. S. Attorney for the Western District of Missouri:

McKee was charged in a 17-count indictment returned by a federal grand jury in Springfield. McKee was the captain of Stretch Duck 7, operated by Ripley Entertainment, Inc. The company operated duck boat tours in Branson, Mo., and on Table Rock Lake and Lake Taneycomo.

The indictment charged McKee with misconduct, negligence, or inattention to duty by a ship’s officer, resulting in the death of another person. McKee is charged with one count for each of the 17 passengers (including one crew member) who died when Stretch Duck 7 sank/\.

The indictment alleges McKee committed a number of acts of misconduct, negligence, and inattention to his duties while piloting Stretch Duck 7 both before and during severe weather conditions.

McKee allegedly operated Stretch Duck 7 in violation of the conditions and limitations specified in the vessels’ certificate of inspection. When severe weather (including increased wind speed) arrived at the vessel’s location, the indictment says, McKee failed to instruct passengers to don personal flotation devices. He allegedly also failed to immediately increase speed and head to the nearest shore. He allegedly caused or allowed the vessel’s plastic side curtains to be lowered, which created a barrier over the vessel’s exits in the event of a need to abandon ship.

The indictment alleges that these acts of misconduct, negligence, and inattention to duty separately and collectively caused the lives of 17 persons on board Stretch Duck 7 to be lost.

Under federal statutes, a conviction for this offense is subject to a sentence of up to 10 years in federal prison without parole on each count of conviction, plus a fine of $250,000. The maximum statutory sentence is prescribed by Congress and is provided here for informational purposes, as the sentencing of any convicted defendant is determined by the court based on the advisory sentencing guidelines and other statutory factors.
Posted by Randy at 7:05 PM

What kind of training and experience does this guy have to be a duck boat captain?

Or is he just some guy paid to act like a captain in his fancy uniform?

Any paperwork or licenses or medical exams?

Easier or harder to be a duckboat captain or a semidriver with a CDL?

So sad that these people were just trying to enjoy life and perished in such a tragic way.