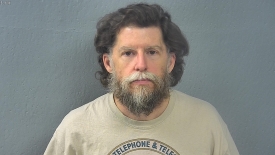 The brother and sister of a Joplin man scheduled to be sentenced Thursday on federal child pornography charges are asking Judge David Rush for leniency.

Their letters were filed today and November 9, respectively, in U. S. District Court for the Western District of Missouri.

While both acknowledge that their brother looked at the child pornography photos mentioned in the charges, they both claim their brother would never do anything to children and the sister insists he should not be sent to prison for just looking at photos.

I do not believe with any part of my heart or mind that Kent has ever done anything to hurt a child either mentally or physically.

I do not know, or have I ever seen, any of the pictures which were allegedly found on his phone, computer, or possession. I do know that I have known him all my life and I have never seen him act inappropriately with any child.

I have never seen any evidence to point to any wrong doing. He has never baited a child, stalked a child, or touched a child to my knowledge. I do not think that having pictures is something that anyone should be locked away for without some kind of positive proof of any abuse of any nature. He has never had any convictions or charges of this type of behavior and I strongly believe that he has served enough time away from his family already.

The sister concludes her letter by saying that she is certain that her brother, who pleaded guilty in May, is innocent of the charges against him.

The brother took a different approach in his letter:

Kent Hagan first and foremost is my brother, I of course grew up with him, and have known him my whole life. He has always been a very strong individual who places great pride in being a good citizen, proud veteran, a person who has a reputation of being fair minded, and diligent with his reputation.

He is about to be sentenced for something I believe he, in my humble opinion, was duped into, by poor judgement, and/or a bad relationship. I do not think he did any of this in any malicious way, nor has he ever physically touched, or mentally abused any child.

I feel this way primarily, because in our current culture with children as young as 10 producing pornographic images, through venues such as tender, Snapchat, and Instagram, our legal system is impotent in that it can not find ways to stem the flow of those venues.

And while our culture applauds the individuality of children being able to sexualize themselves at such a tender age, and call it progressive. The system finds methods of throwing people into prison for making the foolish mistake of downloading those images.

It, in my opinion, and yes I am showing my age, is reprehensible in the highest to incarcerate the end user without going after the factory producing the problem.

It reminds me of how our prisons are filled with drug users, but no drug dealers. While we should not change how our society views the abuse of children, we need to stop manipulative evil from trying to hurry them into consumerism.

We as a culture need to address the root of this problem, not just one of its leaves.

Kent, may have made a mistake, I have not seen any of these “images” nor would I care to, however, he has watched and been with my kids, many times, and never once, did I ever witness, a single incident when he was being anything but a good uncle.

I ask for leniency, and mercy for my brother, who has suffered a great deal, he is remorseful, and in grief as well, as he was incarcerated when my father passed away recently. Thank you for your consideration.

Kent Hagan has been held in the Greene County Jail without bond as he awaits his sentencing. After Hagan's detention hearing, Judge Rush cited efforts made by Kent Hagan, 52, Joplin, to be around children, including the four to six children his girlfriend cared for at her day care center and the woman's three children, and the strong evidence against Hagan, ordered him held without bond.

Hagan was initially arrested after Joplin Police received a hotline tip about Hagan while he was living at an unlicensed day care center.

The informant did not contact the police until she saw Hagan was living at the daycare center again.

When Joplin Police Detective Dustin Moyer and Sgt. Andrew Blair contacted the day care owner, she confirmed the "creepy images" and said she had deleted the photos, which focused on the bottoms of two young girls, both of whom were clothed.

The woman told the policemen she allowed Hagan to return and be around the children because "she was afraid the perception would ruin her business."

Moyer and Blair contacted Hagan at his place of employment and he became nervous, according to the search warrant. They asked if had other computers and he said he did. As they were questioning him about the "creepy" photos, he showed signs of possibly throwing up. He told the officers he would come to the police station after he got off work at 6 p.m. He turned over his cell phone at the officers' request.


At 3:27 p.m., Moyer and Blair went to Hagan's mother's home and found him with one of the devices. He said he had come home early because he was not feeling well.To the officer, it appeared that Hagan may have been trying to destroy evidence. Moyer asked if he could look at the computer and Hagan refused. At that point, all devices were confiscated.

While they were dealing with Hagan, a forensic search was taking place on Hagan's Samsung Galaxy. The search uncovered 809 child pornography images, 69 anime pornography images, with some of the photos featuring children being violated by adults, a female child being violated by a candy cane and a naked child eating corn on the cob, according to the search warrant affidavit.

The owner of the day care center, Betsy Coleman, is scheduled for a hearing November 21 in Jasper County Circuit Court on nine felony counts of endangering the welfare of a child and one count of failure of a mandated reporter to report child abuse.
Posted by Randy at 5:59 PM

You can know someone all your life and not really know them at all. Maybe he hasn't always exhibited interest in children, but according to the evidence, he does now.
Any normal person would never even look up these types of images. If you accidently had one pop up when you were searching for something else, that is an accident. To have hundreds downloaded to your phone, that is a sickness.
Sounds to me like he was positioning himself to start abusing children, by getting a girlfriend who ran a daycare.
The court got it right. Maybe he hasn't harmed any child, but the intent is definitely there.
Stop him before he does do harm.

What is the definition of doing harm? Even if he hadn’t actually taken the pictures and even if he hasn’t molested a child (he likely has but not proven) HARM WAS DONE TO THOSE CHILDREN MENTALLY at the very least. I find it impossible to believe that no children were molested in the process of taking the pictures. He is like someone convicted of murder by being an accessory. Maybe he didn’t fire the shot but participated in someone’s death. He didn’t actually rob the bank but he drove the get away car.

Sorry folks, your brother is not the man you believe him to be.

What are the names of these letter writers?

He did harm by watching and looking at this crap and by not reporting it!