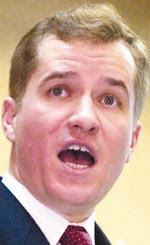 Seeking to shore up his nomination of embattled voucher supporter Donayle Whitmore-Smith to the State Board of Education, Governor Matt Blunt today sent Senator Jeff Smith, D-St. Louis, a file of letters supporting her. Blunt has said he will not push forward with the nomination if Smith, the senator from Ms. Whitmore-Smith's district, does not approve of her.
In a news release, Blunt played the African-American card, noting that he had appointed Ms. Whitmore-Smith and Rev. Stan Archie, both of whom are African-American, to the board. According to the news release:

If the Senate approves Whitmore-Smith, she would be the only African-American parent of school age children serving on the board. Last week, Blunt appointed another African-American to the State Board of Education, Reverend Stanley Archie of Kansas City.

This seems to be an attempt on Blunt's part to add a racist element to anyone who dares oppose the appointment of African-Americans to the State Board of Education. What is not mentioned anywhere in the news release is the reason for the opposition. Ms. Whitmore-Smith has been a longtime supporter of vouchers and has always showed contempt for public schools. While Rev. Archie does not have the baggage that Ms. Whitmore-Smith carries, he, too, is a supporter of vouchers and the latest euphemism for them, tuition tax credits.

"Donayle Whitmore-Smith has the qualifications and background to serve in this post and help our children get the education they need to be successful," Blunt said. "She will also bring a diversity of opinion to the state’s school board. Many others agree that she is the right choice for the State Board of Education. I know Donayle would appreciate the support of her incoming State Senator and we hope that he will consider the many letters we have received endorsing her appointment."

The letters of support for Whitmore-Smith range from parents who sent their children to the school that Whitmore-Smith founded, to a Governor Carnahan appointee to the Coordinating Board of Higher Education, to a university administrator, to the President/CEO of the Urban League of St. Louis, to a member from the Coalition of Hispanic Organizations’ Educational Committee, to Missouri citizens who strongly support the governor’s position regarding a need for a diversity of opinions on the state’s school board.

The only diversity Governor Blunt is seeking is to appoint people who agree with the views of his supporters, All Children Matter and other voucher advocates, that the only way to repair a public school system which Blunt claims is broken, is to appoint people who are willing to divert public money to private schools. To make that assertion, and then to play the race card on top of that, is truly despicable.
Posted by Randy at 2:05 PM

Great. All 38 parents of her students support her.

...I don't suppose he would care to name all those illustrious people who support her nomination, would he?

I think that if his base of church voters in SW Missouri were aware of the facts (name, incense usage, etc.) about his nominee's school they would be upset. Maybe we should tell them?