Nodler: I've got the money to run 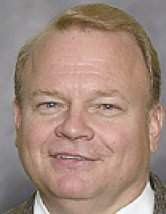 Gary Nodler has enough money to run for statewide office and he plans to continue to raise more.
In an article written by Tracy Swartz in today's Springfield News-Leader, Nodler talks about his decision to change his campaign committee to explore a bid for statewide office:

Nodler plans to hire a political consultant. He said it's too early to determine the state's political landscape in 2012, but his sizable campaign coffers would allow him to poll on support.
He's set to hold his annual fundraising golf tournament and strengthen his monetary resources.
"If I were to seek higher office, I have a pretty substantial base from which to operate," said Nodler, who had banked $104,486 as of Dec. 2.

Nodler indicated he might be interested in running for lieutenant governor or treasurer.
Posted by Randy at 9:00 PM

What's crazy is that Randy just googled "porky pig" and this picture of Nodler came up. Brilliant!

That's odd. I would have thought he wouldn't go for anything less than governor.

Go for it, Gary. You have my vote. You have been helpful everytime I or any group I am part of has asked for support.

Sometimes the bad guys win, and unfortunately for our state we just haven't learned the lesson yet. I polled the office and whoever goes against him already has 18 votes. For anonymous' information, that would be 18 votes against g.n.

ewwww, can't we do better?

For Anonymous who polled his or her office, I bet those 18 votes just voted against him in November didn't they. It's pretty clear he doesn't need that 18 to win and win big! By the way, I bet those 18 are at an office that depends on tax dollars, more like 18 leaches!

Glad to see that Gary doesn't just read The Turner Diaries, er, Report, he posts too!

hmmm, okay. LEECHES is not spelled with an a. You are just so bright. From your messages, it would seem that you are the only sucker around. It's a long time until g.n. runs and if the 18 polled tell 2 friends about g.n. and his big business backers and his inappropriate behaviors (especially with the disabled)and then they tell 2 friends...etc. before you know it...g.n. won't be voted anywhere ever again. Can't change the past, only the future.

Seriously he looks like he belongs on Green Acres......not the t.v. show...he has no star quality....just out on green acres somewhere on a farm chewing slop.

Worms, Leaches & Planaria:
Leeches or Leaches
(Hirudinea)
Leeches or leaches are flattened segmented worms with a sucker on both tail and mouth. They move by attaching the mouth sucker, then tail sucker, then mouth sucker, and so on, to the surface they are on. Most leeches live in the water, some can drying water by burrowing in the mud, some even live on the land. Most avoid light.

Leeches are most commonly known for attaching on to humans and other animals, and sucking their blood. Blood sucking leeches have well developed jaws. Different types of leeches feed on different animals, though there are also some that eat plants, and some that feed on carrion. Some of the leeches that feed on humans secrete a substance that has been found to be an anticoagulant.

another definiton that fits the previous use: To empty; drain: "a world leached of pleasure, voided of meaning" Marilynne Robinson.
v.intr.
To be dissolved or passed out by a percolating liquid.

Its so interesting to be corrected by the profoundly ignorant

leeches or leaches we know that 18 of them are in the same office!

It is interesting how Anonymous chooses to pick on people blogging instead of going over the issues. Much like g.n.
Since you are so immature: we're rubber and you are glue, whatever you say bounces off 18 of us and sticks to you.
Can't change the past, but the future votes are up for grabs. So, Anonymous (or Gary as you are commonly known in our office), good luck.

It is interesting that this last “Anonymous” engages in name calling and speculation about the identity of other bloggers while hiding his or her own. Then when others respond to his vicious name calling and low life personal attacks, he or she doesn't want to be held accountable for their lies and slander. This blogger has never discussed any issues, just attacked people he or she disagrees with and engaged in personal insults. By the way "Anonymous" since you go in for childish behavior " Nodler is elected and you are rejected!". You think blogging is a place for you to launch attacks and that you should never have to prove or defend your lies. You don't want an exchange of ideas, you just want to call names and tell lies and you resent it when you get called on your bad behavior and errors. This is blogging you idiot, bloggs are all about the bloggers. The events and public personalities that are the targets have never been the purpose it’s all about the vanity of the blogger and the several dozen of us that read and respond. If you are delusional enough to believe that the number of people reading and blogging here is more than a few dozen you are truly in need of help!

sorry that your feelings were hurt anonymous gary. don't look if you can't handle it. For the record, I did not make any of the references to Gary looking like Porky Pig (which he does) or the comment about green acres. You are the delusional one if you can't look at the blogs posted and see that you are vastly outnumbered. Good luck in the future.

it would be wonderful if he would just take his money and run, far, far away.

First time blogger, but a coworker has been telling me about this issue. Can anyone tell me why I should vote for Gary Nodler? Specifically. I saw that he has been helpful to someone and/or their group but how has he been helpful? I'm just wondering. The anonymous person keeps writing things saying how great gary is, but how is he great. I didn't vote in the last election but plan to vote next time. Please inform me, specifics please.

Hey! I resemble that remark!

Hey Numbnut. First of all your link doesn't work. Secondly, I never ever go to the PR source direct from the desk of the person in question for information. Self sponsored PR sources are by definition a lie no matter which party.

By the way, Nodler. Been beating up on the small and helpless again lately. Go ahead and complete the picture by telling us what a wonderful christian you think you are. (sarcasm)