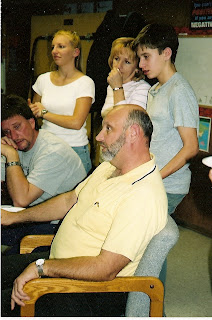 "We have, in McDonald County, Raymond Lambert, who is married to his stepsister," Dobbs says. "We have George Johnston, who is an uncle to Raymond Lambert. It is alleged by some members of that community that the religious leaders may, in fact, be the biological parents of several children who have been born into this group."

One alleged victim described her encounters with Rev. Lambert this way:

"The first incident started with taking my clothes off when I was 15 years old," she said. "He touched me from head to toe, every part of my body, and told me that this body belongs to God. And the only way that I could subject myself to God is to give my body to Raymond, who is God in the flesh." She grew up on the farm, passionately believing in God and church, trusting that her sexual relationship with Raymond Lambert would bring her closer to God. "I believed that it was right, and that it was OK," she said. "I didn't feel like I needed to tell anybody, because I was believing in that at the time."

A portion of the feature centered on the late Cecil Epling, whose beliefs form the basis of the Grand Valley Independent Baptist Church and the Grandview North church:

Months before these allegations, families in the religious community were coping with other disturbing news, says Amey Burkett, who grew up on the 100-acre-farm.

Her grandfather was the late Cecil Epling, a minister originally from Ohio. According to Burkett, Epling wanted his seven sons and four daughters to become a tight-knit community, so he helped buy them the Missouri farm. When Epling died, his stepson, Raymond Lambert, took over the ministry. George Johnston later joined the family's church.

Family members say Cecil Epling passed his sexual beliefs to both pastors, teaching them that they needed to fulfill the sexual needs of their daughters and selected girls in the church.

"What's inside of them is God, and they think that they have all the power, all that it takes to take care of a woman," Burkett says.

There are times when I would just as soon not tell people I'm from Missouri. I have read Internet posts that claim some of the same type of abuse has gone on at Dan Gayman's compound in Schell City.