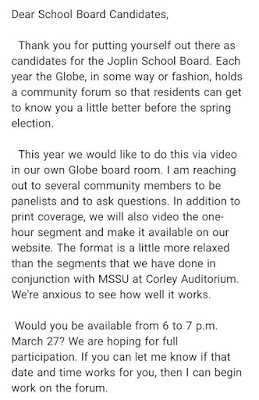 in her letter to Joplin R-8 Board of Education candidates, Joplin Globe Editor Carol Stark promises a "little more relaxed" forum to be held in the Globe board room.

What Stark does not explain is why the public is being excluded from the forum, except, of course, by reading about it in her newspaper or watching it on the Globe's website.

In the past, as noted in the letter, the Globe has sponsored the forum in conjunction with Missouri Southern State University and held it on the university campus. MSSU also broadcast it live on the campus television station and posted the video on YouTube to offer even more access to Joplin R-8 patrons.

As someone whose newspaper sponsored public candidate forums in the '80s, including city and school board forums in Lamar and Liberal, I can attest that much work goes into these events and few members of the public attend.

There is also a difference between a forum that places the candidates under the kind of pressure they will face if they are elected, rather than participating in a "more relaxed" forum with a handful of people in the newspaper's comfortable board room.

As it is, the newspaper will provide a page one story, with much of it jumped to an inside page, in which each candidate is relegated to a couple of quotes and plenty of paraphrasing- and the video, which may or may not be easy to access for district patrons, many of whom do not read the Globe, with good reason.

Hopefully, someone will step forward and provide an additional forum for the candidates, one in which the public is not considered to be an unwelcome intruder and one in which questions that truly matter to district patrons and not just ones who are interested in how it helps a narrow, well-to-do segment of our community.

The Globe forum does not appear designed to help anyone except that narrow segment, and of course, the Globe.
Posted by Randy at 10:21 AM

Nothing to see here folks. keep moving along.......