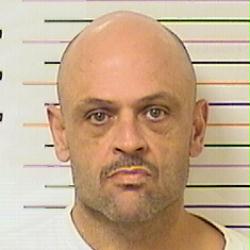 A May 22 trial date has been scheduled in McDonald County Circuit Court for Jeffrey Hill, 50, Joplin, who is charged with driving while intoxicated and assaulting a law enforcement official in connection with a January on a November 30, 2015, incident in which he allegedly drove a vehicle at Joplin police officer Seth Lugenbell.

The details of the charges in the following Joplin Police Department news release from December 4, 2015:

On November 30, when officers initially responded to 3330 S. Texas Ave. Apt. 102, at 9:16 PM, Jeffrey L. Hill had broken a window and had been attempting to force his way into the apartment in an attempt to contact Mindy D. Melton-Bauersfeld.

Hill had fled the scene prior to the first arrival. The primary residents of the apartment are Ann and Michael Essig. Ann Essig signed a complaint against Hill for property destruction. An unsigned complaint for domestic assault was completed by the officer on behalf of Melton-Bauersfeld.

At 10:37 p.m., officers again responded in reference to a disturbance. Hill had returned to the apartment and was pounding on the door as well as the previously broken window. An occupant of the apartment opened the door and asked him to leave and Hill shoved his way inside briefly before Michael Essig was able to push Hill back out.

Hill was in the process of fleeing the scene when he then drove his vehicle at the officer. One element of assault is defined by state statute as purposely or knowingly placing or attempting to place another in fear of physical harm.

The Domestic Assault statute covers family or household member, spouses, former spouses, any person related by blood or marriage, persons who are presently residing together or have resided together in the past, any person who is or has been in a continuing social relationship of a romantic or intimate nature with the victim, and anyone who has a child in common regardless of whether they have been married or have resided together at any time.

The evidence at the scene and independent witness statements corroborate that Hill drove his vehicle directly at the officer. Hill's actions caused the officer to be in fear of serious physical injury or death. The officer responded by firing multiple gunshots at Hill.

Hill is charged with two other felonies, armed criminal action and driving while revoked.

The case is being heard in McDonald County on a change of venue from Newton County.
Posted by Randy at 6:33 PM