Hawley: Repeal of Clean Power Plan is a victory for Missouri 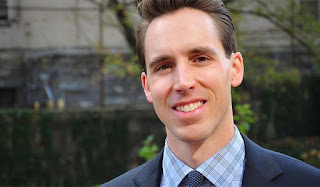 Attorney General Josh Hawley today hailed the latest deregulation order from the Trump Administration as a major victory for Missouri. Trump's order, signed Tuesday, begins the repeal process for the so-called Clean Power Plan, a massive network of regulations issued by President Obama that would have driven energy prices up in Missouri by double digits. Missouri challenged the regulations in federal court as unconstitutional.

"This is a major win for the people of Missouri," Hawley said. "As we have long argued and as legal experts from across the political spectrum have recognized, these regulations are flatly unconstitutional. We fought these job-killing regulations in court and soon they will be gone. Relief is on the way for Missouri families."

Missouri was one of 27 states that challenged the Clean Power Plan in federal court. The US Supreme Court issued an injunction against the plan in February 2016.
Posted by Randy at 8:37 AM

In November 2015, the investment bank Lazard headquartered in New York, published a study on the current electricity production costs of photovoltaics in the US compared to conventional power generators. The best large-scale photovoltaic power plants can produce electricity at 50 USD per MWh. The upper limit at 60 USD per MWh. In comparison, coal-fired plants are between 65 USD and $150 per MWh, nuclear power at 97 USD per MWh. Small photovoltaic power plants on roofs of houses are still at 184–300 USD per MWh, but which can do without electricity transport costs. Onshore wind turbines are 32–77 USD per MWh. One drawback is the intermittency of solar and wind power. The study suggests a solution in batteries as a storage, but these are still expensive so far.[62][63]

Below is the complete list of LCOEs by source from the investment bank Lazard.[62]


Solar PV-Rooftop Residential 184 300
Solar PV-Rooftop C&I 109 193
Solar PV-Crystalline Utility Scale 58 70
Solar PV-Thin Film Utility Scale 50 60
Solar Thermal with Storage 119 181
Fuel Cell 106 167
Microturbine 79 89
Geothermal 82 117
Biomass Direct 82 110
Wind 32 77
Energy Efficiency 0 50
Battery Storage ** **
Diesel Reciprocating Engine 212 281
Natural Gas Reciprocating Engine 68 101
Gas Peaking 165 218
IGCC 96 183
Nuclear 97 136
Coal 65 150
Gas Combined Cycle 52 78
If you can read and understand numbers you will see that Coal is not the best option. LCOE is Levelized Cost of Energy. Note that wind and solar does have its ups and downs, but with gas and some limited clean coal energy needs can be met with renewable sources. The biggest and best solution is energy efficiency which has a large and sustained payback as to building newer plants, upgrading existing plants and one major thought is health implications of mercury, CO2 and other chemicals released into the environment. Just apply science and the newest numbers on jobs created by renewable energy is around 200,000 paying more than dirty energy, creating fewer earthquakes with other benefits. People need to learn to be mobile and go where the jobs are and provide for their families in a respectable manner. Coal towns as shown by news specials are breeding areas for overuse of opiates and poor health and environmental conditions.

Hawley you are a bought and paid for fool. (mic drop)

It won't matter. Fracking and the free market killed coal. This might slow the rate that KCPL converts and shuts down coal plants, but it won't save the coal industry.

Amen!!!
Anonymous 9:18 has it right!
Anybody to beat McCaskill in '18
Is Lazard still in business?