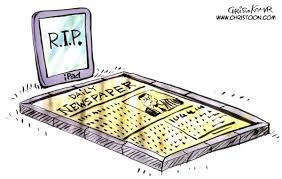 Gatehouse Media is making drastic cuts at its area newspapers, company sources have confirmed to the Turner Report.

The Carthage Press,  which a few years ago published six days a week, then was cut to five, and is now publishing twice weekly, will have only one print edition per week.

The Miami News-Record will publish twice a week.

In its article on the changes, the News-Record says it will continue to publish daily news online. Reportedly, that will also be the plan at the other publications.

Sources have also confirmed to the Turner Report that the newspaper company will also be cutting jobs at the already thinly-staffed newspapers, in addition to reducing the number of issues per week.

When will this happen? I guess we will have to stop this paper and take the globe.

That would be drastic. Birds refuse the Globe as a cage liner.

This is par for the course with GateHouse Media. GateHouse reminds me of the scene from the movie Ghost Story: "I will show you things that you have never seen and I will suck the life right out of you." GateHouse wrings every possible cent that it can out of its newspapers, bleeds them dry, and then either dismantles or closes them. GateHouse does not care about Carthage, or Neosho, or Miami; it is just trying to suck a few more dollars out of these poor communities.

Who cares. Adapt or die just like any other business.

I wonder if, in my lifetime, the Smithsonian will add a newspaper box to its collection of items people don't use anymore. I love the feel and the smell of a fresh newspaper. Reading it online ain't the same, but the business hasn't found a way to make money with an online presence.

That's what I used to think, too, but in this case, it really is because of GateHouse's poor management.

I found out I was loosing my job in today's mnr. They didnt even have the decency to tell the carriers first. Cheryl Franklin is a coward, like the rest of the publishers in this group. I hope that everyone cancels their subscriptions. I hope the advertisers realize that their ads do absolutely nothing for the advertisers. If you need proof, go to Neosho and look in their recycle bin, or go to Miami and look in their warehouse.

I normally make it a point of not telling people who is or is not a source,, but I do not use John Hacker as a source for anything I write about Gatehouse Media, unless it is something that he has already published. It puts Hacker in a bad position any time I write about Gatehouse since his bosses are fully aware that we have co-authored two books, but I have sources inside Gatehouse whose identities I will protect and because I have written extensively about the company in the past, many of them are from outside their area.

Ok Randy...if that makes you feel good. I'm not sure anyone is buying that

No, we wouldn't understand. Turner is to us merely a lying back-biting cowardly skunk who pisses on everyone who is onto him.

I've been without a newspaper for years and don't miss it one bit. Every so often I read whatever big lie they want to spread on the newsstand.