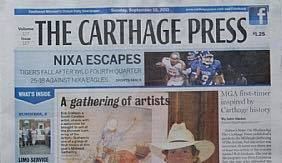 Gatehouse Media's decision to turn the Carthage Press from a twice-weekly newspaper to a weekly and the Neosho Daily News from a five-day-a-week newspaper to publishing twice-weekly dominated this week's most viewed posts on the Turner Report taking the top two spots, while also faring well on the new Inside Carthage blog.

The most visited post on any of the blogs this week came at Inside Carthage with the revelation that Ace Mohr, who is free on bond while awaiting trial on multiple felonies including dealing cocaine and heroin, was arrested for DUI and may have his bond revoked.

3. Future in doubt for Sears store at Northpark Mall

5. How do we attract veteran teachers to come to the Joplin R-8 School District?

10. Ed Emery meets with vulgar, profane "I guess they call themselves transgenders"

3. Neosho woman charged with DWI after slamming into two mailboxes

4. Carthage man arrested after holding ex-girlfriend and her brother at gunpoint

4. Carthage man arrested after holding ex-girlfriend and her brother at gunpoint

6. Carthage Press publisher: Once a week will make us stronger, more robust

Randy...a question for you. I know you've worked on small newspapers before, what is the solution to making these small papers viable again so they can be more than a once a week publication?

It would not be easy, but part of the problem is that we have gone over the past few decades from newspapers being family-owned to bring parts of chains like Gatehouse Media and Gannett with more allegiance to stockholders than to readers and communities. The family newspapers survived nicely on an eight to 10 percent profit margin, while the chains began boosting those profit margins to close to 40 percent in some cases by making cuts in personnel and coverage. While this strategy was successful for a time, Gatehouse took it to a different level, wildly overpaying for small and medium-sized newspapers and not able to make enough cuts and combine enough services to make it financially viable. Gatehouse, like all newspaper chains, did not adjust to the arrival of the internet and began losing circulation and classified advertising and eventually display advertising. It is a company that will not be able to adjust because it has made no effort to improve its products. It cuts jobs, moves services out of communities, eliminates most of its local news coverage and then blames the communities for not supporting their local newspapers.

The few remaining newspapers that are locally owned, including one in upstate Missouri that was created to challenge a Gatehouse paper and ended up putting it out of business have been able to have continuing success by offering a local product that actually serves the community. Small weeklies have also continued to have great success, while even some major newspapers have seen a revitalization in recent months by re-emphasizing what should have been the emphasis all along- strong local news coverage.

At this point, Carthage and Neosho might never be able to get back to being daily newspapers. That is how much Gatehouse has contaminated the newspaper market for this area, but at the same time there is no reason why a newspaper that actually serves the community couldn't publish two or three times a week and augment its coverage with a strong social media aspect, website or even a regularly updated blog.

towns the size of carthage and neosho will never financially support a daily paper. the advertisers don't care