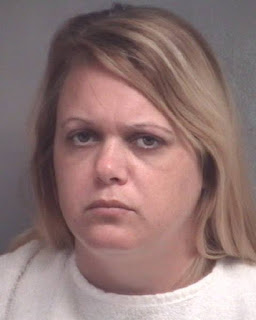 A former North Middle School reading teacher engaged in sexual misconduct with at least three students on school grounds, according to a lawsuit filed against the Joplin R-8 School District December 28 in Jasper County Circuit Court.

Amanda Schweitzer, 38, already faces a felony statutory rape charge for having sex with a 13-year-old boy at her home March 29. Her trial is scheduled to begin April 11 in Jasper County Circuit Court.

While the criminal charges took place away from the school, the lawsuit alleges Schweitzer was preying on teenage boys in her classroom and on social media:

In early 2017, Schweitzer began grooming the minors via social media and text message in violation of JSD policies.

As the school year progressed, the messages from Schweitzer to T.C. intensified in volume and became increasingly sexually suggestive.

In or around March of 2017, while at school, Schweitzer ran her hand through T.C.’s hair and nibbled on his ear. She later messaged him via Instagram and asked him if he enjoyed it.

Subsequently, T.C. blocked Schweitzer from communicating with him via social media.

At or around the same time, Schweitzer approached J.L., who was a student in her class, and engaged in unwanted sexual touching of the minor.

District officials should have known Schweitzer was preying on the students, according to the lawsuit.

The sexual harassment of the boys follows a pattern of R-8 officials not dealing with similar situations of assault and misconduct taking place on district premises, the petition alleges.

All three boys suffered from ridicule after the knowledge of the charges against Schweitzer was made public, according to the lawsuit.

The plaintiffs are asking for a jury trial.

The lawsuit is the second such action filed against the R-8 district in the past nine months.

The former JHS student's lawsuit's claim that the district has had "at least nine incidents of sexual misconduct or assault since 2010" is repeated in the lawsuit filed on behalf of the three North Middle School students.

The lawyers representing the boys and their parents, Michael J. Fleming and George E. Kapke Jr. of Lee's Summit and Elizabeth Turner of Joplin, are also representing the alleged statutory rape victim in a lawsuit against Schweitzer, which was filed November 3 in Jasper County Circuit Court, which included the following description of Schweitzer's actions:

While at her home, Schweitzer engaged in sexual intercourse with C.A. As a result of the encounter, C.A. has been sustained emotional injuries. In addition, C.A. was forced to finish the semester off campus after the encounter with Schweitzer came to light. He subsequently transferred schools.
Posted by Randy at 6:29 PM

I wss recently informed that they do not perform random drug screenings on school employees. I firmly believe they should along with extensive background checks.
These people are entrusted with our children.

Careful though as you might lose the entire faculty here.

I understand. Exactly my point. They need to drug screen.

Wow. Let's calm down guys. All the drug tests and background screenings in the world would not have caught this crazy lady as this was the first time she'd ever done something of this sort. Teachers are held to stringent background checks. If drugs are suspected, teacher can be drug tested.

Not true.
There is no random drug screen policy for Joplin RVIII

I am so glad that the parents are suing the district. The last two principals at North, Brandon Eggleston and Mathew Harding, both knew that this type of behavior was going on. They encourage teachers to give out their cell numbers to students and to friend them on social media. So many inappropriate student/teacher interactions. It’s a shame that the boys had to go through this. A horrible nightmare for the parents.

Haiti doesn't have anything on Joplin. I'm sure it would fit Trumps 'shithole" category.

Sadly, suing the school means tax dollars will be used to pay the danages...