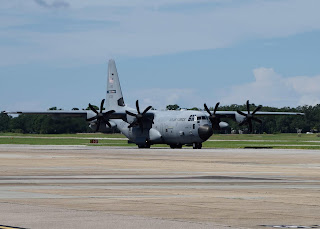 (From the U. S. Department of Defense)


The 53rd WRS is the only Defense Department unit that flies reconnaissance missions into severe tropical weather during the hurricane season, June 1 through Nov. 30, to gather data for the National Hurricane Center to improve the center's forecasts and storm warnings.
The Hurricane Hunters' first mission into Florence was Monday evening. The Hurricane Hunters departed here Sept. 9 to operate out of Savannah/Hilton Head International Airport, Georgia, for Florence reconnaissance. Florence became a hurricane Sept. 9 and will impact the Carolinas and Virginia late Thursday and into Friday, according to the NHC.

The Hurricane Hunters have completed two missions into Florence, now a Category 4 storm -- including one today -- with three more missions already tasked and two more possible, said Air Force Lt. Col. Thomas Moffatt, a navigator for the 53rd WRS.
Lifesaving Data
Oceans are data-sparse environments, due to the lack of radar and weather balloons over those areas. And satellite data can be incomplete, so the data the Hurricane Hunters provide is vital, potentially saving lives and property, said Air Force Maj. Jeremy DeHart, 53rd WRS aerial reconnaissance weather officer.
During a hurricane, crews fly through the storms at 5,000 to 10,000 feet above sea level, flying through the eye of a storm four to six times to locate the low-pressure center and circulation. During each pass through the center, they release a dropsonde, an expendable weather reconnaissance device that collects weather data such as surface winds and pressure on its descent to the ocean surface.
Each crew has a loadmaster that drops an average of 8 to 12 dropsondes while in flight, depending on how many times the mission flies through the center of the storm, said Air Force 1st Lt. Garrett Black, 53rd WRS aerial reconnaissance weather officer. Ten devices were dropped on the most recent flight. It takes about 10 minutes for the collected data to travel from the dropsonde to the plane to the NHC being 10 minutes.
Working alongside the Navy, which is gathering data showing the relationship of the ocean temperature and how it can affect storms, are members of the U.S. Coast Guard Reserve. These members are releasing buoys called Airborne/Air Expendable Bathytherographs, or AXBTs, which collect data such as water temperature, said Coast Guard Reserve Chief Petty Officer Steve Jayne, a maintenance engineer.
Providing this data to the NHC will keep the squadron busy, especially since September is the peak of the annual hurricane season. Last year was the 10th busiest season on record, and this month looks to be a busy one as well.
In addition to monitoring Hurricane Florence, members of the unit deployed to Hawaii this month to fly reconnaissance missions into Hurricane Olivia, and today they are tasked to fly a low-level investigation mission into a disturbance approaching the Gulf of Mexico. Tropical Storm Isaac and Hurricane Helene are also in the Atlantic, but the squadron is not tasked to fly those storms.