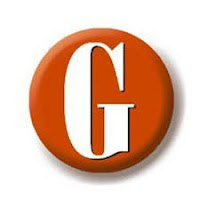 Several months ago, someone sent me a message telling me I would not believe what I would see if I typed http://www.turnerreport.com.

I had checked a few times to see if that domain name was available and it had not been, but rather than get angry I thought it was funny. Someone had played a practical joke.

I never believed for one moment that it was someone at the Globe.

I knew there were people who work at the Globe who are capable of such things. I remember a few years ago when a couple of the people who work there and who consider themselves to be the arbiters of everything cultural in Joplin wrote a blog post and comments about the 2007 YouTube video showing the band I was with, Natural Disaster, performing Johnny Rivers' Secret Agent Men, with me on the vocals.

They thought it was hilarious to make fun of me. Of course, if they had been paying attention they would have realized that they couldn't say anything negative about my singing or my stage movements or my appearance that I had not already said many times. I have never taken myself as seriously (though I am sure some of you will disagree) as those folks at the Globe who consider themselves to be the arbiter of what people should like.


So as more people have told me that it was indeed someone at the Globe who thought it would be hilarious to take the domain name www.turnerreport.com I did not find it hard to believe.

Apparently, there are people at the Globe who take me seriously.

Or not, depending on how you look at it.

One thing is for sure, they read the Turner Report.

I appreciate the opportunity to help the people at our area's newspaper of record find out what is going on in Joplin and the surrounding area.

The lists of the top 10 most visited posts for this week on the Turner Report, Inside Joplin and Inside Joplin Obituaries are featured below with links to each post.

Thanks again to those of you who have subscribed or made contributions to the Turner Report/Inside Joplin this week. If you have not done so, please consider subscribing or making a donation at the PayPal buttons below the links or by sending your contributions to Randy Turner, 2306 E. 8th, Apt. G, Joplin, MO.

Thanks for your readership and for your support.

3. Joplin City Finance Director: Why's everybody always picking on me?

7. In jailhouse letter, accused Jayda Kyle killer says, "I've never been a part of anything so corrupt"

2. Granby Police Department offers to test your meth to see if it's real or fake

6. Cause of Joplin recycling center building fire under investigation, building is total loss

Help support the Turner Report/Inside Joplin news operation with a subscription or contribution. Help keep this alternative news source continue to provide news and commentary for the Joplin area. You can subscribe or make a contribution at the PayPal buttons below or you can mail a contribution, large or small, to Randy Turner, 2306 E. 8th, Apt. G, Joplin, MO

Hey Randy- better make the transaction before posting the comment!

Buy the domain joplinglub.com and direct it to Turner Report.

Or joplinglubnewspaper.com and direct it

Lol...that you believe any news source is envious of your keen ability to copy and paste.

My definition of practical jokes is that they're played by friends. I was not under the impression you had friends at the Globe, though you're certainly under no obligation to report who your friends are. It feels more like the equivalent of egging someone's house at Halloween. You've landed enough body blows to get them to want to do something in return.

I could, of course, be completely wrong.

Whoever it was wanted to cover their tracks. The Whois registration is private. done through a third-party, DomainsByProxy.com, to assure anonymity.

Just to throw this out there, it is highly possible that it wasn't anyone at the globe that even did this. Anyone can buy a domain name and redirect it anywhere they want.