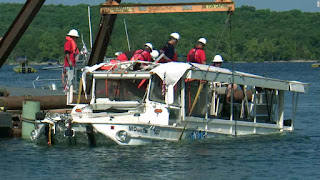 An Arkansas woman whose husband and son were killed in the July 19 duck boat tragedy on Table Rock Lake in Branson filed a wrongful death lawsuit Thursday in U. S. District Court for the Western District of Missouri charging the owners and operators of the ride with liability and negligence.

In her lawsuit, Pamela Young Smith describes an outing that turned into tragedy and ripped apart her family. In addition to losing her husband Steve, 53, and son Lance, 15, her other child, Loren, was injured and has suffered emotional trauma, according to the petition.

Listed as defendants are Ripley Entertainment and Ride the Ducks International.

Smith, who is represented by the law firm of Friday, Eldredge & Clark LLP, Rogers, Arkansas, is seeking damages in excess of $75,000.

The petition outlines the events of July 19.

Pamela and Steve had taken their children to Branson for a family vacation, and Steve, Lance and Loren decided to take a Duck Boat Tour on July 19, 2018. The tour was scheduled to leave at 5:30, but it was delayed as a result of  maintenance issues with another Duck Boat.

Passengers began to board the Duck Boat at 6:29 p.m. The Duck Boat’s Captain mentioned during boarding that he had reviewed the weather radar. A Severe Thunderstorm Warning was announced for Table Rock Lake at 6:32 p.m., warning that the area was expected to experience strong winds of up to 60 miles per hour.

However, Defendants proceeded with boarding and the Duck Boat Tour began anyway. The Duck Boat entered the waters of Table Rock Lake at 6:55 p.m., more than twenty minutes after the Severe Thunderstorm Warning was announced.

Shortly after entering the water, the waves began to “whitecap” and the winds increased in velocity. The Captain ordered the plastic side curtains lowered over the windows on the Duck Boat at 7 p.m.

This decision later prevented passengers’ escape through the windows of the Duck Boat. The bilge  alarm sounded at 7:04 p.m., indicating that the Duck Boat had begun taking on water. The Duck Boat’s onboard recorder stopped working at 7:08 p.m., and the Duck Boat subsequently sank to the bottom of Table Rock Lake only a short distance from land.

Steve and Lance were among the seventeen passengers who lost their lives. Loren survived, traumatized and having suffered physical injuries.

The lawsuit outlines the history of serious problems with the duck boat rides, including at least 39 deaths since 1999.