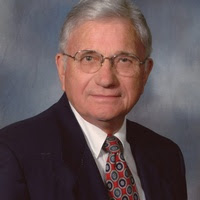 For those who love the newspaper business, there is no sound that brings more joy than the press printing hundreds of copies in a few minutes.

The press was the vehicle through which the work of reporters, editors and advertising sales people landed on our doorsteps each day, detailing the day-to-day lives of our community and those who lived in it.

That was the way it was when Ken Cope entered the newspaper business more than six decades ago.

The press that Ken Cope helped operate as he began a long career in newspapers was not the state-of-the-art press that shoots out thousands of papers in minutes. Cope's career began in the days of the linotype, a much slower process involving the use of hot metal . At the time, the Neosho Daily, which was owned by Cope's father-in-law, Howard Bush, also ran a job printing shop, where Cope worked.

Cope, who had attended one year at Joplin Junior College, continued his education at the University of Texas and though he received his degree in editorial journalism when he returned to the family business, it was not on the editorial side. There were no jobs available in that department.

So Ken Cope resumed his journalism career as an advertising salesman.

Over the next three decades, Cope and his wife Anne eventually bought out Anne's brothers, Channing and Richard Bush, and became the sole owners of the Daily. Cope also spent time serving his community as mayor.

When Kenneth and Anne Cope sold the Neosho Daily News to American Publishing, they did so with the firm belief that they were selling to a company that had the same love for community journalism that they had held their entire adult lives.

And that was the way it was for many years. Through the tenures of numerous editors, beginning with Anne Cope herself, Bill Ball, Rob Viehman, Buzz Ball and John Ford, the Daily continued to offer coverage of Neosho, Newton County and McDonald County.

Its pages featured the words of Harlan Stark, Mary Alice Campbell, Dean Keeling and others who helped keep the community informed six days a week, every week, year after year. During much of that time, Ken and Anne Cope's son Randy served as publisher.

"The purpose of the local newspaper is to cover local news," Mr. Cope said in a 1997 interview. Putting in canned items sent out by ownership would defeat that purpose, he added. "They'd be cutting their own throats."

In her editor's column Anne Cope often wrote about "The Runner" her nickname for her husband because of his love of running, a love that was so fervent that he qualified for and ran in the Boston Marathon.

It was only a few weeks ago that it was announced that the Neosho Daily News, the newspaper the Cope and Bush families operated successfully for decades, would only be published once a week and the printing press, the press that was the pride and joy of the newspaper's operation, was being silenced forever, as printing would be transferred to a plant in Columbia, a decision that was made by GateHouse Media, the type of owners that Ken Cope never envisioned would ever own the newspaper that had been a labor of love for his family.

Sadly, Ken Cope's climb from the linotype to the upper rungs of journalism, including induction into the Missouri Press Hall of Fame in 2004, has also come to an end with his death Saturday at age 83.

It is truly the end of an era when not only the printing presses, but the giants who kept them operating, are no longer running.

Visitation for former Neosho Daily News Publisher Kenneth Cope, who died Saturday at age 83, will be held 6 to 7:30 p.m. Tuesday at Clark Funeral Home in Neosho.

A complete obituary will be printed later on Inside Joplin Obituaries

Excellent tribute to Ken Cope, Randy. Ken had a profound influence on my life, not only in the newspaper industry, but in most every aspect of my life for the past 55-plus years. He will be greatly missed.