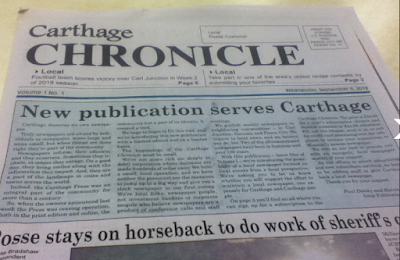 If your idea of a good newspaper is the Jasper County Citizen, the Sarcoxie Record or the Pierce City Leader-Journal, you are going to love the new newspaper that Carthage residents received in the mail Thursday.

Just one week after the closing of southwest Missouri's oldest newspaper, the Carthage Press, the Carthage Chronicle was introduced to the community by Paul Donley, the publisher of the three newspaper mentioned in the first paragraph.

"Carthage deserves a new newspaper," the introductory article on the top of page one stated succinctly."

So when the owners announced last week the Press was ceasing operations, both in the print edition and online, the community lost a part of its identity. It created a void.

In the remainder of the article, it is explained that the interest of the community will determine whether the Chronicle continues to publish and directs readers to a subscription form on page 3.

Donley is charging $34.98 annually for Jasper County residents and $44.98 for those outside the county.

The back page features a lengthy article on last Friday night's Carthage football game, along with some excellent game photos. That is a good start, but Carthage was playing Carl Junction. It will be interesting to see if the same type of coverage is included of tonight's home Carthage game against Joplin.

After a week of not having any newspapers, the Turner Report has learned Carthage may soon have multiple publications. A second newspaper is reportedly in the planning stages.

Was this sent to all Carthage mailing addresses? I would like to see one, but I did not receive one.

Got mine in Friday mail.

I didn't get a copy of this either.