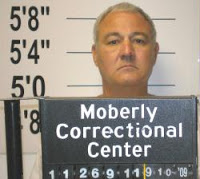 Bond for accused drunk driver Edward Meerwald, 63, Noel, was reduced to $15,000 surety Monday. Previously, Meerwald's bond had been $5,000 cash only.

Meerwald is held in the McDonald County Jail after being charged with driving while intoxicated after he was pulled over June 17 by a Highway Patrol trooper.

In his bond reduction motion, Meerwald's attorney, William Weber, Pineville, noted that his client was "the sole support of his household," that he had been working at Simmons Foods and had always shown up for hearings in the past.
Weber says that Meerwald "maintains his innocence," would not attempt to flee and would abide by any conditions set by the court.

The motion was originally overruled by Judge John LePage. Judge Kevin Selby who is hearing the case after Weber's motion to disqualify LePage was sustained, granted the bond reduction.
The events that led to Meerwald's arrest were outlined in the probable cause statement. Trooper Derek Carnagey said Meerwald was clocked doing 77 miles per hour in a 60 zone south of Split Log Road on MO 59.

"When I turned around and activated my emergency lights, the vehicle continued southbound at approximately the same speed. Eventually, the driver observed my patrol car and emergency lights behind him."


Meerwald told the trooper he had been to Joplin and was driving to his daughter's home. Carnagey smelled alcohol on his breath and asked if he had been drinking. Meerwald said he had two beers.

"I informed him two beers would definitely not place him anywhere near the legal limit."

According to the statement, Meerwald voluntarily provided a breath sample on the trooper's portable tester. Despite his claim that he had only two beers, Meerwald said he would fail the test. The sample registered .177, more than twice the legal limit.

Because of the test and Meerwald's statements, Carnagey asked him to perform further tests. "Meerwald claimed he had issues with both feet being previously broken, along with cellulitis in his legs causing swelling."


Carnagey placed Meerwald under arrest and took him to the Pineville Police Department for a chemical breath test.

This guy should be in prison for a very long time and should NEVER be able to drive again.

How disturbing.
What is wrong with people? Just letting him out to do it again. People like this don't care about anybody but themselves. He'll probably do it all over again. I feel sorry for the family he took from. 😡😥💔

It should be NO BOND

I know he had multiple DWI arrests before he hit and killed the little girl and her grandpa in their own driveway and was driving without a license . He should still be in jail and there should be no bond.

This is very disturbing. What the hell is Selby thinking?

Selby also reduced the bond on Victor Alanis who killed two people on Highway 60, East of Granby. Alanis had pending charges against him for DWI in another county when he killed the two people in Newton County. And Selby still reduced the bond.

Doesn't Selby have someone running against him? Someone sure needs to run against him.

Andrew Wood -- a competent attorney is running as an independent against Selby.

Selby is pretty lawless as a judge.