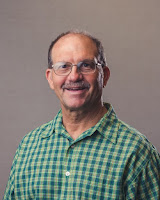 Robert Andrew Pommert, 60, who has worked as an instructor at Ozark Christian College and Crowder College, and who taught guitar at Palen Music in Joplin for more than 20 years, was arrested by the Newton County Sheriff's Department on the basis of information provided to investigators by the clinical child therapist at the Children's Center in Joplin, who reported receiving disturbing information from a three-year-old girl that indicated to her that the child had been "exposed to inappropriate sexual behavior."


According to the probable cause statement, when a deputy asked Pommert about the allegation, "stated that he wanted his attorney."

A bond appearance hearing is scheduled for 9 a.m. October 2, with Judge Gregory Stremel presiding.
Posted by Randy at 9:45 PM