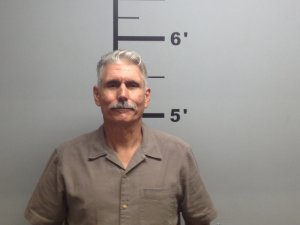 NOTE: The charges against Dr. Stuppy have been dropped. His wife pleaded guilty to a misdemeanor marijuana possession charge and received a suspended sentence.)

A Rogers, Arkansas cardiologist and his wife were running a marijuana operation on their property, according to a probable cause statement filed in McDonald County Circuit Court.

On 9-21/2018, members of the McDonald County Special Response Team retrieved one motion-activated camera out of three that had been placed on a suspected outside a marijuana grow on 09/07/2018.

The male subject and the female subject were identified as Robert Stuppy and Becky Stuppy through their Missouri Department of Revenue photos.

During the search of the residence, detectives found approximately 16 pounds of a green, leafy substance that field tested positive for marijuana and 10 rifles in a locked safe room that was hidden behind a bookshelf that appeared to be mounted to a wall.

The Stuppys are free on $5,000 cash bond each. Their arraignment is scheduled for 10 a.m. October 29 before Judge John LePage.
Posted by Randy at 11:25 PM

This is an absolute waste of time and resources. They grew a plant on thief own oroperty, so what?

I agree with Kelly. Complete waste of time. Go bust a meth lab.

I agree with you!

No "marijuana operation" was being "run". They were no doubt growing it for their own personal use. 16 pounds when dried and processed, is going to be about 3 pounds.
Law enforcement should concentrate on getting pedophiles and real drug dealers off the streets.

Were the cameras on their property? Not sure how you can steal something if someone comes on to your property and places it there.

Geez...what a complete waste of our tax payer resources...why can’t we concentrate on real criminals...

These are the real drug dealers. Are you really that dense? Do you really think law enforcement really gets to pick and choose what laws they enforce? You pot heads are unbelievable. I am constantly amused at the people who get mad at cops for doing their job. They are now lawmakers, the legislative branch is. Go back to school and take a basic civics course people. For god's sake, the ignorance is astounding. What would you have them do? Enforce only the laws you believe are appropriate? Seriously?
Also, it just amazes me how all of you feel the need to smoke dope alllll there timmmeeee. Unreal. Yes let's legalize it so that you can all just get high 24/7 and contribute even less to society.

The law is the law. Change it if you don’t like it. It’s not OK to break it.

I WOULD WAGER METH HAS DAMAGED MORE LIVES/FAMILIES THAN POT.

I do not want to negate the work that Dr. Stuppy has done for his patients. And as a nurse, I never remember Stuppy being "high" on the job. Yes, the law is the law, but I can't help but wonder how someone spotted their "garden" and then called the cops on them. I think that growing enough weed for personal usage is fine until the laws change and people can do this in the open. People from Kansas are driving to the Colorado borders and then bringing their supply back to sell or use. There is a great deal of research that has been done on the positive effects of marijuana on certain disorders. With that smile on Dr. Stuppy's face, it doesn't look like he is worrying about going to jail.

He was always such a cool dude

I just want to point out how funny it is that @3:34 is calling other people ignorant while showing theirs the most.

What do the rifles have to do with this??? Geeeez. People conceal them in their homes like this because if they are burglarized they will be taken!!!!...or am I the only one that knows this???