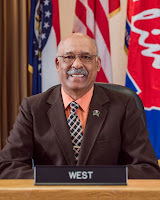 Citizens interested in filling the vacant General Seat on the Joplin City Council seat should submit an application to the City Clerk’s office by 5 p.m. Thursday, March 7, 2019. Applications can be obtained through the Clerk’s office on the second floor of Joplin City Hall, 602 South Main Street. The office is open from 8 a.m. to 5 p.m. Monday through Friday.

Candidates for the Council General Seat should be a qualified voter of the City of Joplin and have been a Joplin resident for at least the immediate past four years.

The City Council will hold a special meeting on Monday, March 11 for applicants to present their qualifications to the Council. Each candidate will be given five minutes for their presentation. Council members will have a week to consider all applicants in the process of filling the seat until they reconvene for their regularly scheduled City Council meeting on March 18, 2019.


During the March 18 meeting, Council members will vote on the applicants to determine who will take the vacant general seat. The candidate who receives the majority of Council votes will fill the post and be sworn in during this meeting. The newly elected Council member will complete the unexpired term, which is up for re-election in April 2020.

This Council seat became vacant upon Jim West’s resignation from the Council. The Joplin City Council voted to accept his resignation at the February 19, 2019 Council meeting.