During her last year in the Jasper R-5 School District, Karla Justice (formerly Jessee) the Board of Education secretary was paid more than any secretary in the district.

Justice made more money than any teacher or principal in the school district.

According to a document filed today in U. S. District Court for the Western District of Missouri, Justice raked in $91,000 that year...more than the district superintendent's salary.

Assistant U. S. Attorney Patrick Carney included those details in a response to Justice's motion to have her 30-month sentenced reduced or thrown out because of the alleged incompetence of her lawyer.

Carney said Justice should not be allowed to have a hearing and noted that the judge could have sentenced her to 35 years in prison.

As a result of Justice’s theft, the school was forced to freeze employee salaries, go to a four-day school week, cancel their preschool and summer school programs, and pay $19,618.04 for the BKD forensic analysis report 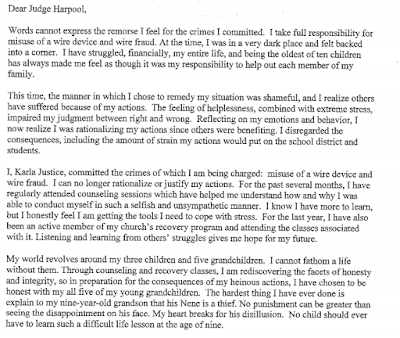 Carney's response notes that not only did Justice receive the best kind of break she was entitled to under federal sentencing guidelines, especially considering the many methods she used to steal money from the district, but that much of that was because of the work her lawyer had done in preparing a sentencing memorandum.

The memorandum not only included legal arguments, but numerous letters of support for Justice and her own letter (pictured) taking responsibility for what she did.

In her motion, which she filed acting as her own attorney, Justice claims her lawyer, Elizabeth Turner, did a good job with the memorandum, but performed poorly during the sentencing hearing.

Justice is serving her sentence in a minimum security prison in Galesburg, Illinois, 43 miles east of St. Louis.
Posted by Randy at 2:57 PM

This embezzler is exactly where she needs to be. I only wish she were going to be locked away from society for 35 years, because she is just an evil human being. She stole thousands of dollars from school children--how much lower can one be? And now, after only five months, she envisions herself as a jailhouse lawyer! LOL LOL LOL

Her letter—-blah, blah, blah. The letter is all about her, not the victims of her crime. Typical sociopath. She’s still blaming others, now it’s her lawyers fault she’s in this predicament.

A lapse in judgement doesn’t go on for years. She’s just a garden variety con. Suck it up buttercup, show those grandchildren a most valuable life lesson, you do the crime, you do the time.

I think it should read Greenville, Il. There's a federal prison there. Galesburg is 200 miles away and due north of St. Louis.

Ever notice that women who steal from employers, school districts, PTA chapters or cemetery funds all receive what amounts to a slap on the wrist, but men who commit these crimes get the book thrown at them?