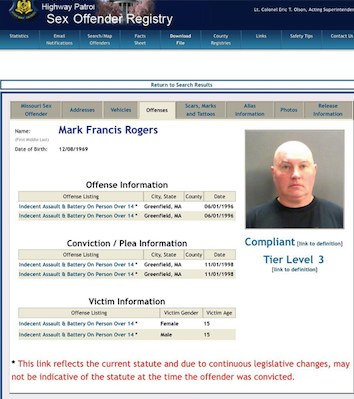 The chef and co-owner at the LaFamiglia Restaurant/Double Eagle Tavern at the Briarbrook Golf Course in Carl Junction, Mark Rogers, is free after posting $1,000 bond after being arrested on a felony charge of failure to register as a sex offender.

Rogers assumed part ownership of the family restaurant, which also handles the food service for the pool during the summer.

The Jasper County Sheriff's Office arrested Rogers February 8, according to court records, which show he had been living in Carl Junction since December 28 without notifying the sheriff as required by law.

Mark Francis Rogers was convicted of indecent assault and battery of a person over 14 years of age (two counts) a felony in Greenfield, Massachusetts on 11/1/1998.

The victim in the case was a white female age 15, while Rogers was 26 years old.

Rogers registered with the St. Charles County Sheriff's Office on February 17, 2004 in O'Fallon and signed sex offender registration forms indicating he was familiar with Missouri laws.

He was convicted of a felony sex offender registration violation in Miami County, Kansas on January 12, 2012, according to the probable cause statement.

LOST ANGELS: THE MURDERS OF ROWAN FORD AND DOUG RINGLER

Available now in paperback and e-book- Lost Angels: The Murders of Rowan Ford and Doug Ringler