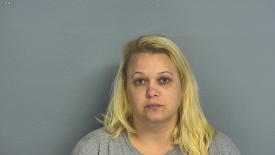 The trial of former North Middle School reading teacher Amanda Schweitzer, originally scheduled for March 26, has been reset for June and may never take place.

The defense motion for continuance U. S. District Court Judge Roseann Ketchmark sustained today said, "negotiations are continuing between the parties with the goal of resolving the above reference case before the next trial setting."

Schweitzer, 39,  is charged with sexually exploiting a minor and transmitting obscene material to another minor.

The defense motion indicated that if an agreement is not reached, more time is needed to evaluate discovery and consider potential motions to suppress.


According to the grand jury indictment, Schweitzer "used, persuaded, induced, enticed and coerced a minor, John Doe (DOB 2003) to engage in sexually explicit conduct for the purpose of producing a visual depiction" which was then sent to a child born in 2002.

The charges were filed in connection with an investigation initiated by the Joplin Police Department after it received reports Schweitzer had sent nude photos of herself to three boys, age 14, 14 and 13. It was during that investigation that they came across the evidence indicating Schweitzer had sex with the 13-year-old.

If she were a he and the victims were underage females, she would already be serving a lengthy prison term. I decrie hypocrisy and double standard.
I am disgusted by the prejudice of the legal system.
Women shpuld be given the same sentences as men in situations. They want equality only when it benefits them.

This is the very problem with the judicial system. Accepting and or allowing crimes to go unaccounted for and unpunished continues to put innocent lives at stake. Let's have the judge and the council drop their kids off with her for the day. Let's see how they feel about a plea deal.