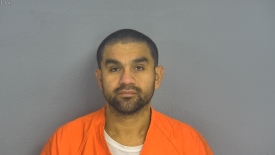 A grand jury indictment of a Sarcoxie man on felony meth trafficking and weapons charges was unsealed today in U. S. District Court for the Western District of Missouri.

The indictment charges Willian Florian-Palma with six felony counts- one for meth conspiracy, three for trafficking, and single counts of using a weapon in the commission of a crime and being a felon in possession of a weapon.

Law enforcement officials had already filed the complaint against Florian-Palma and he has been held without bond since the Highway Patrol arrested him in January.

Florian-Palma's crimes and his long criminal history were detailed in the government's detention memo filed January 28:

To further support the Government’s contention that Defendant is a risk to the safety of the community and poses a flight risk, the Government offers that:

The present charge arises from Defendant’s sale of approximately 86 grams of suspected methamphetamine to an undercover officer on December 20, 2018.

Additional controlled purchases of methamphetamine from Defendant were attempted or completed.

On January 9, 2019, an undercover officer arranged to purchase two pounds of methamphetamine from Defendant. Defendant travelled to Tulsa, Oklahoma, to secure the methamphetamine but was unable to obtain it that day.

On December 14, 2018, an undercover officer purchased approximately one ounce of suspected methamphetamine from Defendant for $500.

On December 24, 2018, officers of the Carthage, Missouri, Police Department made contact with Defendant and found him in possession of a loaded .357 magnum revolver. A further search of Defendant’s person yielded approximately two ounces of suspected methamphetamine. An additional one ounce was discovered in his vehicle.

Court records indicate Defendant has previously been convicted of the following offenses:

-Unlawful use of drug paraphernalia on July 30, 2015, in Jasper County;

Felony driving while impaired (persistent offender) on September 30, 2013, in Jasper County; and

Driving with an excessive blood alcohol concentration on August 16, 2009, in Jasper County.

Missouri court records indicate Defendant was charged with delivery of a controlled substance on or about August 23, 2018, in Jasper County, and the charge remains pending.

Defendant’s continued criminal activity suggests an unwillingness or inability to abide by conditions of release that are crafted to protect the public from additional criminal conduct.
Posted by Randy at 5:26 PM