Mark Rohr: Marshall, Texas is in a lot better shape than other cities I have inherited 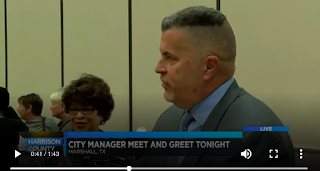 During a meet-and-greet Tuesday at the Marshall, Texas Convention Center, new City Manager Mark Rohr praised his new city and compared it favorably to other places where he has worked.

The most recent jobs Rohr has held, as noted in a report from Shreveport, Louisiana station KSLA, were city manager posts in Joplin and League City, Texas. Rohr began his new job in mid-January.


"Marshall has a lot of assets: a highway location, a lot of colleges and institutions of higher learning and the downtown," (Rohr) said.

“I think the downtown is an asset. It’s in a lot better shape than a lot of the other cities I have inherited in the past," Rohr continued. "I think there’s more we can do to enhance that asset; and I think that will be an area of focus moving forward.”

You have a very unhealthy obsession with Rohr. Let the guy go live his life and provide for his family. I'm pretty sure you have made wrong choices in your own life, most have.
Forgiveness is a respectable quality in a human being.
God bless you and God bless Mr Rohr and his family.