I don't make up arrests- they all come from official sources, plus the "F--- yourself, Trump cartoon and this week's top posts 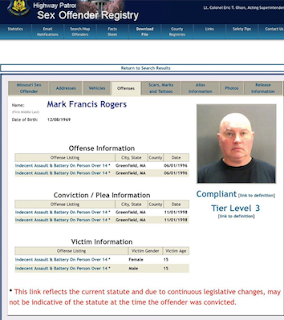 In those situations, and it has grown in intensity since the advent of social media, people accuse me of making things up, threaten me with lawsuits or bodily harm, insist that the person who has been accused would never do anything like that and sometimes begin attacking the veracity of any alleged victim.

That especially happens when the Turner Report is the first media outlet (and sometimes the only media outlet) to report on the arrest.

Six of this week's Top 10 Turner Report posts involve people who are well known in their communities or who hold positions that make their arrests notable.

Two of the posts involve the arrest of a Sarcoxie High School English teacher on a felony charge of having sex with a student. Though both posts received wide readership, I did not have any complaints about them because the story was being reported by all media outlets.

I also did not receive any negative feedback from the report Friday on former Joplin day care owner Betsy Coleman who is charged with nine counts of felony child endangerment. That report featured new information about a case that has been in the news, at least on this blog, for months.

A holdover post from last week's Top 10 about new charges against a former Lamar Middle School student teacher received no feedback. When the first charges were filed against Emily Edson, I received some criticism for reporting that she was in Missouri Southern State University's teacher education program.

I included that information for two reasons- it was a connection for Joplin readers and a point of interest was that Emily Edson had received an award only a few weeks earlier for being the top middle school teaching prospect at the university.

Though some accused me of taking a shot at the university, I did not see the information as being negative about MSSU. The award and the education Edson received and what the police say she decided to do with it make for a compelling story.

Another post featured the news that a former Joplin cardiologist was practicing once again at Mercy Hospital in Rogers, Arkansas, after drug and weapons charges against him were dropped.

I haven't received any negative feedback this time around, but I did when the charges were filed. He didn't do this, some of them said. Others complained because he had not been practicing in Joplin for a long time, so why did I refer to him as a Joplin doctor. Again, it was a connection to the community and apparently McDonald County authorities did not feel that he did it, so I ran that story as prominently as I did his arrest.

Finally, the one that brought the biggest criticism this week and was the most visited Turner Report post- the arrest of the co-owner and chef at a Carl Junction. I received messages telling me to take the story down because it was not true and I was going to regret running it.

The information I post on arrests comes from court documents or law enforcement news releases. I do not post names of those who have been arrested until I have it from one of those sources. In the case of the Carl Junction restaurant co-owner, I even ran a photo of one of the documents.

The descriptions of the crimes on my blogs, if any descriptions are offered, come directly from probable cause statements or official news releases.

The same thing holds true for people arrested by the Highway Patrol for DWI or other charges. At least a dozen times, I have had people contact me, some threatening lawsuits, because they were never arrested.

I don't make the arrests up. That would be stupid. I always point out to the people who contact me that their name comes from a webpage labeled "Highway Patrol Arrests." Often, I send them a link to that page.

Strangely, they never seem to be happy that I did not just make up the information.

The "F--- yourself, Mr. Trump" cartoonist

The Joplin Globe dropped the cartoonist who hid a message telling President Trump to "f--- yourself."

I saw some people complain that it was done to please the president's right wing supporters, with some people saying it violated the cartoonist's First Amendment rights.

Though lightning may strike me for writing this- the Globe was absolutely right to give the cartoonist the heave ho and it is not a First Amendment issue.

I don't just say that because the Globe is not a government entity. Globe editors should not have to go through every comic strip with a magnifying glass because some self-important cartoonist tried to sneak a message to his readers.

Some cartoonists try to stretch the boundaries with political commentary and there is nothing inherently wrong with that. They, however, almost always do it out in the open and don't feel they need to sneak their messages past the censors. If the Globe was killing the Non Sequiter comic strip because of its political content, I would speak against it no matter what the views were.

This isn't about politics. This is about a cartoonist who showed no respect and violated the trust of the newspapers that ran his comic strip.

The Globe made the right decision.

1. Co-owner/chef of Briarbrook restaurant frese on bond after arrest for felony failure to register as a sex offender

2. Probable cause: Sarcoxie High School teacher admits to having sex with student at her home

5. Reports: Payless ShoeSource to close all stores, going-out-of-business sales set for next week

9. Joplin man who secretly recorded videos of three children in bathroom sentenced to 28 years in prison

10. Sarcoxie R-2 Board seeking to have teacher's certificate revoked after filing of felony sex charges

1. Three injured, including baby, in accident on ice-covered bridge on I-44 near Carthage

LOST ANGELS: THE MURDERS OF ROWAN FORD AND DOUG RINGLER

Available now in paperback and e-book- Lost Angels: The Murders of Rowan Ford and Doug Ringler