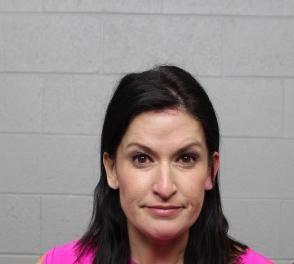 Former KODE anchor Tiffany Alaniz, now anchor for Fox 23 News at Noon in Tulsa, was charged with driving under the influence after crashing into a utility pole in a rollover crash at 17th and Peoria in Tulsa.

The crash left the area without power for several hours.

The Tulsa World account says Alaniz after officers thought she showed signs of being intoxicated and underwent field sobriety tests.

She posted bond and was released.

Alaniz, a Tulsa native, anchored KODE's 5, 6 and 10 p.m. newscasts during the early part of this decade, after spending the 2000s at KSN, forming a highly successful team with weatherman Gary Bandy, first on the morning show and later with a 5 p.m. newscast/talk show format.

For a time, Alaniz also served as assistant news director at KSN.

Oklahoma court records do not show any previous DUI arrests, but Alaniz has received five speeding tickets in the past four years and three months, including two in which in which court records indicate she was going 16 to 20 miles per hour above the speed limit and two others in which she drove 11 to 15 miles per hour over the limit. The tickets were issued in Delaware, Mayes, Rogers (2) and Tulsa counties.

Alaniz has a February 27 court date on the most recent speeding ticket, which took place January 11 in Mayes County.

My goodness can you not find anything better to post about on social media. You post this as if she is a high profile criminal and your a perfect citizen that's never driven above the speed limit.

Shut your mouth! Your coming off stupid

I agree. They don't cover all DUI's so stop singling out people because of the name.

Hey good people make mistakes too. Glad the rest of the world gets to see it. Maybe everyone else can get the point that everyone makes mistakes.

She should be called out! She always acted better than the rest of us! If you do the crime!!

If you do the crime,you should be exposed!

People acting like Mr. Turner is a bad person for posting this..... get a life he is posting it because it is news and that is what he reports....... news!!! And yes if you read the paper they report all DUIs.... don't drive drunk and you won't get blasted....... My brother was killed by a drunk driver so I have ZERO pity for her!!

Thank goodness she didn't hurt or kill someone. Herself included. A very costly mistake for her. At the very least-she could use this wake-up call as a chance to do some good.

Not the first area news person in the area to get one DH has had atleast one too!

Did you post mugshots for Mike Olmstead and Doug Heady? They’ve both been arrested for DUI.

she looks ripped probably was out with Ron Burgundy

We’ve been getting her unpaid traffic tickets out of Texas for awhile...change your address!!!

Once a party girl, always a party girl. She ain't the only one in that circle. I have no respect for them.
Looking rougher an rougher.

You know the turnpike authority in Texas sends bill for traveling on tollways based on liscense plates as well. Not sure how you can determine they were unpaid traffic tickets without tampering with her mail, which is a felony.

I think I would have not posted this to single her out, which it does. Obviously, there is a pattern of her risk-taking behaviors with speeding tickets and now the DUI. Unfortunately, it will probably take her being in the news to force her to deal with the behaviors.

People complaining because you are reporting the real news, wow. "Don't tell us the truth, we want to be lied to! How dare you make people see the light?"
Too bad there is no vaccine for stupid.

I think it's funny on some of these comments.. she was in tv.. so yeah it's a big deal in this area. Glad no one got hurt..

I'm sorry to hear this, as she's also a mommy.

Thank you for the detailed information.

Thank you for the detailed information.

Was not necessary to repost this old news, unless of course, someone is jealous or wanting to be hurtful. Life is full of mistakes, but we recover & go on.

Then she should be more responsible than to drink and drive, definitely NOT thinking of her kids welfare. What will they do if she is killed or injured severely? She has stopped using her brain for sure or just dont give a Sh*t anymore.