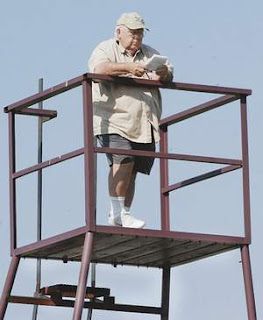 Former Lamar High School band director Jerry Hoover is taking another university band to the Tournament of Roses Parade this year, but this time with a slight difference- it will be the first time his band will represent the state under the university's new title of Missouri State University. The Springfield News-Leader's article in Saturday's edition began like this:

More than a decade ago, a parade organizer saw something special in the Missouri State University Pride Band. He never forgot.

C.L. Keedy, now organizer for the Tournament of Roses parade, tapped the pride band to lead off the parade. He first heard the band perform in 1995.

"It was impressed with the band when I first heard them," said Keedy, who was in Springfield on Friday to meet with the Pride Band leader. "When I was appointed to the executive committee, I knew I'd be president in 2008 and I said I had to have

Missouri State back when I was president. I didn't tell anybody. I kept it a secret."

(Photo by Springfield News-Leader)
Posted by Randy at 7:16 AM