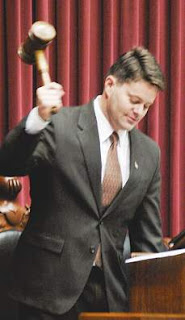 Missouri Ethics Commission records indicate that on July 29 Speaker of the House Rod Jetton, R-Marble Hill, did some traveling with fellow Representatives Shannon Cooper and Tom Dempsey. Though the records are not specific, they do indicate each of the three representatives received $63 for travel from Kyna Iman. Since the entity she was representing was the Missouri Canoe and Floaters Association, it is fairly easy to guess what that travel might have signified.

On June 20, Jetton was the recipient of a meal costing $102.19 (mighty fine eating in these parts) from superlobbyist William Gamble, allegedly representing the Kansas City, Missouri, the Missouri Beverage Association, and the Missouri Railroad Association.

A month earlier, on May 24, it was Nancy Giddens, lobbyist for the Greater Kansas City Chamber of Commerce, who bought Jetton a lunch worth $40, one of two $40 meals she bought him during the month.

In fact, in the three years since the Missouri House of Representatives, in good part due to Jetton's leadership, passed bills stripping thousands of poor Missourians from Medicaid, the speaker has received $2,964.33 worth of gifts from lobbyists, including $820.81 during the first seven months of 2007, and $1,230.88 in 2006.

It would be surprising to hear that any of the lobbyist-supplied meals included Pop-Tarts or Twinkies. That is why it is so disappointing to hear Jetton disparage the poor during his remarks at the Ozarks Food Harvest Conference in Springfield last week, which were the subject of Editorial Page Editor Tony Messenger's column in today's Springfield News-Leader. In the column, Messenger notes Jetton talked about the fact that at one time he was on food stamps:

But unlike Jetton, I don't feel it's appropriate to throw those shoes in the trash now that I can afford new ones.

That's what Jetton did when he implied that the problem with the food stamp program is that single women on welfare are spending their food stamp money on "Twinkies, Pop Tarts and steak."

It must be their fault.

"Americans pay their taxes, and they want to help other people," Jetton said. "We're a generous country. But they get frustrated when they don't see it going to the people who really need it."

Let's apply Jetton's logic to the legislative body he's been leading the past couple of years.

Did the Missourians who pay their taxes really want to see more than $100 million worth of tax credits going to well-heeled business interests in the form of the so-called economic development bill that Jetton supported, a bill that was thankfully vetoed by Gov. Matt Blunt? Even the slimmed-down version passed by Jetton et al. takes about $70 million in tax credits and applies it to big business in a variety of different fashions. Who's eating steak in that equation?

Access to money is a nice thing that many Missourians, especially the ones disparaged in Jetton's speech, long for. This "pop-tarts, twinkies, and steak" group of single women, a quick easy applause line that backfired on the speaker, would love to have some of the big bucks Jetton's leadership committee received during the second quarter of 2007, according to the July disclosure report filed with the Missouri Ethics Commission.

Jetton's committee received $5,000 from Carthage-based Fortune 500 company Leggett & Platt, $10,000 from the Missouri Health Care Association, the same group that did its best to water down reforms sought by Rep. Kevin Wilson, R-Neosho, following the Anderson Guest House fire, $2,000 from the Missouri Insurance Coalition, and $25,000 from retired billionaire Rex Sinquefield.

Yes, that kind of money would buy a lot of "pop tarts, twinkies, and steak," but more importantly, it would be a great start in keeping people from going hungry.

(Associated Press photo)
Posted by Randy at 9:09 AM

I don't mind paying my taxes either, but I'll be damned if I want them to spend the money promoting a stupid bike ride through the State. Next thing we'll be supporting rodeos, stock car races, turtle races, tricycle races, you name it, its out there with their hand out. Much like a school board, if we don't spend the money "they" won't let us have it next year. We gotta' expand the services.

I am just as tired of paying taxes to these people. He simply said what many others believe; unfortunately it is not the "politically correct" thing to say but it is so true. And don't even make me respond to the "it's society's fault" logic. I grew up with nothing at all and busted my ass to get what I have. If you get just a little initiative you can make a better life for yourself and your family without expecting handouts.

I blogged about Jetton's remarks also. What is most interesting to me is a comment left on my blog: "So, we were subsidizing his PRIVATE education at SBU by feeding him and his family. Perhaps they should have considered working while going to a PUBLIC institution and then they wouldn't have been eating on our dime."

Typical let the government take care of us mentality.

The idiot comment on the other blogsite sucked the hind tit a little too long.

Like it or not, most people do feel exactly the way Jetton was honest enough to speak.