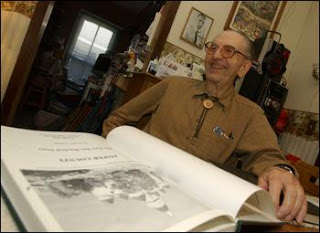 Today's Joplin Globe features a long-overdue profile of one of this area's greatest living treasures, Carthage author-historian Marvin VanGilder. I had the good fortune to work alongside Marvin from the time I arrived at The Carthage Press in April 1990 until his retirement in December 1993, and then talked with him hundreds of times over the next six years during the time I was editor of The Press and Marvin was writing three columns a week for the newspaper. (He increased that number to four during the 49 weeks that The Lamar Press was published.) Check out Melissa Dunson's article, which includes this information:

Even now, in poor health and past the age of retirement, VanGilder insists on keeping himself busy. He continues his lifelong passions of writing poetry and composing music, as well as giving private music lessons and continuing his historical writing.

“My whole life has been like that, it’s been work, work, work, and I don’t understand anything else,” he said. “I’ve always said that I hope I die with one foot in the air, on the way to something else.”

His contributions to the Carthage community are particularly longlasting, as he was part of the committee that organized the first Maple Leaf festival so many years ago. In the 1970s, he was eventually honored with the title of Maple Leaf Grand Marshal. He served as the chairman of the Jasper County Courthouse preservation committee, and helped with the renovations of the city’s Memorial Hall. It was VanGilder’s research that helped motivate legislators to designate the Battle of Carthage State Park, signifying the first Civil War battle fought.

He served on the Carthage R-9 Board of Education during the time of reorganization, and was the first honoree of Carthage’s now annual Citizen of the Year award in 1970.

(Joplin Globe photo by Roger Nomer)
Posted by Randy at 7:29 AM