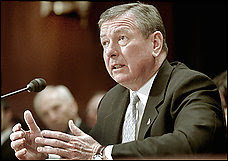 The Springfield News-Leader follows up on the story broken by KY3 that former Attorney General John Ashcroft will not allow television cameras when he speaks on the Missouri State University campus Wednesday night:

MSU President Mike Nietzel said Tuesday that he was unaware of Ashcroft's demands.

"This is the first I've heard of it. I have not been included in those discussions," Nietzel said, adding that he would look into the situation. "I don't know how the agreements were reached."

Mike Scott, general manager of KYTV, said he was "disappointed" by Ashcroft's demands.

"It's a newsworthy event and he's speaking on a topic —homeland security —that is of utmost interest to our viewers and we can't bring a camera in," he said.

Three school organizations — the Accountancy Club/IMA student chapter, the College Republicans and the Young Americans for Freedom —paid a total of $12,000 for Ashcroft's appearance.

If the event is going to be held at the university and is being sponsored by university organizations, this ban should be lifted, contract or no contract, and shame on the organizations for agreeing to these terms. You would hope the College Republicans would be in favor of media access to their events since a free press is such an important part of the America I would assume they love.

Find out more about the newly published Turner Report book at this link or order it through Amazon.com.
Posted by Randy at 3:46 AM