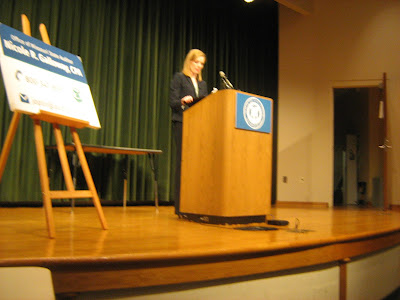 Members of the Citizen Advisory Recovery Team (CART) and the leader of the Joplin Area Chamber of Commerce came under heavy criticism in the report issued this evening in the Corley Auditorium at Missouri Southern State University by State Auditor Nicole Galloway.

The audit report indicated O'Brian and Cage were instrumental in steering the City Council toward Wallace-Bajjali and toward the master developer concept.

Cage created the scorecard through which proposals for master developer were scored, leaning it heavily toward items that would work for Wallace-Bajjali, while O'Brian deleted a key e-mail in which David Wallace suggested that the city of Joplin should hire a master developer.

The report detailed how Wallace, a Sugar Land Texas businessman, former mayor and partner in Wallace Bajjali Development Partners swooped into Joplin right after the May 22, 2011 tornado and worked with CART and the Chamber to get his firm installed as the city's master developer.

Galloway noted at the beginning of her presentation that Joplin's recovery has been a success story, but that while thousands came to help, "unfortunately, in the months that followed, as the audit makes clear, others came to profit- specifically, a salesman named David Wallace."

"There is no question of the failure of Wallace-Bajjali Development Partners.

"The question now is 'How did this happen?

The firm was hired despite a dismal track record and an inability to do a project of this magnitude, Galloway said and much of the deliberation that went into Wallace'Bajjali's hiring was done behind closed doors.

"The city spent millions of taxpayers' dollars with no development to show for it."

The audit report goes into detail about how non-elected officials were allowed to steer the city government toward Wallace-Bajjali, even permitting David Wallace to establish the criteria through which the master developer was chosen.

The city did not ensure the selection process for the master developer was handled by person independent and free of bias, and documentation supporting the selection of the master developer was insufficient  to support the city's decision. The predevelopment agreement was written to benefit Wallace-Bajjali and did not adequately protect the city and Wallace-Bajjali failed to comply with several contractual requirements and obligations.

The auditor noted the subpoenas that were issued to several of those involved in the process of selecting the master developer. Two of those who were subpoenaed, CART Chairperson Jane Cage and Chamber of Commerce President Rob O'Brian were singled out in the report.

After we took depositions on January 8 and 9, 2015, and reviewed additional records provided, we notified appropriate law enforcement agencies and the Jasper County Prosecuting Attorney in January 2015, of facts in our possession, which pertain to possible violations of state and/or federal statutes and possible malfeasance, misfeasance, or nonfeasance.

That same month, Wallace and his partner Costa Bajjali resigned from Wallace-Bajjali Development Partners and the Joplin office was abandoned.

The report details the history of CART and its formation on June 30 , 2011, at the recommendation of FEMA. What was not noted in the report, but was pointed out both in my book Silver Lining in a Funnel Cloud and in former City Manager Mark Rohr's book, Miracle of the Human Spirit, is that CART was for the most part made up of a regular group of non-elected city "leaders" and there was no effort to reach beyond this group.

Wallace-Bajjali may have benefited from favorable treatment during the RFP (request for proposals) and qualifications preparation and evaluation process because the RFP preparer and two evaluators had been meeting with David Wallace or employees of Wallace-Bajjali before the RFP was drafted and proposals solicited. In addition, the city did not take sufficient actions to eliminate potential conflicts of interest before awarding the master developer contract.

The Joplin Chamber of Commerce President Rob O'Brian drafted the RFP and qualifications for the master developer during December 2011. Chamber invoices indicate Chamber of Commerce President O'Brian and another Chamber employee, Gary Box, traveled to Houston, Texas, on October 1, 2011, to meet with representatives of Wallace-Bajjali. They also met with David Wallace on October 13, 2011.

Box later evaluated the master developer proposals and was subsequently hired by Wallace-Bajjali in August 2012. Additionally, an employee from Wallace-Bajjali submitted a parking invoice from Dallas, Texas, dated December 5, 2011, which indicated he was meeting with City of Joplin representatives.

Chamber credit card invoices indicated Chamber of Commerce President O'Brian indicated he first met with Wallace in August 201, and met with him several other times during the fall of 2011.

Also, in sworn testimony CART Chairperson Jane Cage indicated she had met with Wallace a few months after the tornado and at other times during the fall of 2011. Chairperson Cage was also a member of the CART ITF and an evaluator.

Chairperson Cage developed the evaluation scorecard, evaluated the master developer respondents and completed a scorecard, and compiled the totals of the scorecards. It is questionable why the Chamber president, CART chairperson and another Chamber employee had multiple meetings with a potential master developer company or its partners prior to drafting the evaluating the RFPs.

In sworn testimony, Chamber of Commerce President O'Brian indicated Wallace suggested the master developer concept for redevelopment of the city, and a Wallace-Bajjali employee e-mailed him a template of an RFP at Wallace's request. However, Chamber of Commerce President O'Brian indicated he deleted the e-mail. These prior relationships with Wallace-Bajjali may have impaired the RFP preparer and the evaluators' ability to act impartially when preparing and evaluating the RFPs.

The request for proposals included a requirement for letters of intent, which Wallace-Bajjali was already working on gathering, according to the report.

It is unclear how Wallace-Bajjali was able to obtain 11 letters of intent for various projects within the redevelopment area before the concept of a master developer was presented to the City Council or an RFP was issued, unless the firm had prior knowledge of potential project details.

Wallace-Bajjali submitted 11 letters of intent dated prior to the ITF's December 12, 2011, recommendation to the City Council to retain a master developer (eight of the 11 were dated in September 2011 and the remaining letters in November 2011).

In total, Wallace-Bajjali's proposal included 15 letters of intent. Six of the letters utilized the same basic language and appear to be based on a letter of intent template.

One letter of intent already referred to Wallace-Bajjali as the City of Joplin's master developer, according to the report.

The city's Planning and Community Development Director Troy Bolander told auditors "he was shown Wallace-Bajjali's letters of intent prior to the issuance of the RFP and even before the city determined it was going to hire a master developer."

Wallace-Bajjali later hired two of the 10 RFP evaluators, according to the audit report and also hired former Chamber employees. O'Brian told the auditors the Chamber "has no policies limiting a Chamber employee from accepting employment from a vendor he/she worked with on a Chamber project."

Documentation provided by Jane Cage after it was subpoenaed by the state auditor's office also raised further questions about why the ITF recommended hiring Wallace-Bajjali.

One of the documents provided was from an ITF evaluator with financial and banking experience. The document was addressed to the Chamber President and indicated the evaluator was "seriously questioning" Wallace'-Bajjali's "staying power for the long term and the tangled web that we (the city) could be drawn into by contracting with Wallace-Bajjali.

"One of the individuals contacted for a reference check indicated Wallace-Bajjali's proposal responses regarding his own financial position were 'a little strong,' 'overstating their position,' and 'don't know if they are able to pull it off or not.'

"Comments from another individual contacted for a reference check were also critical of Wallace-Bajjali and included 'stay away as far as you can,' 'bit hats, no cattle,' 'no capabilities,' 'how financed response is we've got partners, they have nothing' and 'making a huge mistake to be involved with them.' "

Others noted that Wallace-Bajjali took credit for projects in which "they were only minor players."

Three evaluators gave Wallace-Bajjali far more points than any of the other companies, including one that included for Sen. Kit Bond and another which had successfully done business in Joplin.

Seibert told auditors he could not remember why he had given Wallace-Bajjali more points.

***
While the Joplin Globe has been pretending these things were not happening, the Turner Report has been reporting on problems with Wallace-Bajjali since well before the Joplin City Council hired the company. Consider a subscription or a contribution and help the Turner Report/Inside Joplin continue to grow.  Use the buttons below, or if you would prefer not to use PayPal or a credit card, send your contribution to 2306 E. 8th, Apt. G, Joplin, MO. Thank you for your consideration.

Turner Report readers always knew what we smelled comin outta Joplin. No matter what the Wally BeJolly fools tried to tell us.

So, what are you prepared to do, Joplin?

You give Turner way to much credit, a lot of people knew this was a scam. But, when you have a run away idiot city manager named Rohr, a idiot running the Chamber named Obrian, an idiot named Cage running a group she had no business leading, an ex cop with a bully complex and no brain named Box, idiot stamp the paper JRC leaders Darby and ex CEO of Freeman Duncan. A city council heavy with idiots during the tornado and then voting in more idiots to council after the tornado.

All these idiots make the citizens of Joplin look like idiots for allowing them to fleece the city funds, and don't forget the idiot that is the city finance director, who could not count to five if she didn't have five fingers.And the city attorney who cut and ran; who let all the Wallace Bajjali contracts to be signed off on with no benefit to the city of Joplin but to Wallace Bajjali.

Add in a crooked Mayor, and a crooked developers Kuehn and a bunch of idiots running the local banks, SMB's idiots Garry Denny and Steve Kokebeck and Arvest President what's his name. You finally have to have one of the Largest Conservatives in Joplin expose these idiot crooks.
There is so much clean up to do it will be lucky if Joplin survives with out bankruptcy, adding the fact that Joplin lets city vehicles to be used as personal vehicles, Expensive city parties,.
Joplin you better get your act together, to us outsiders, you all look like a bunch of IDIOTS for letting this all take place under your noses when people like the JRC member that is mentioned pointed out all of this to you. But was told that he needed to stop disrupting the idiots crooked scam.

Nothing ever changes in Joplin. I seem to recall the City of Joplin losing nineteen million dollars when the Junk Bond Market collapsed. It would appear that retention of money has never been Joplin's strong suit.

Will the two pin heads of Wallace Bajjali be indicted for their crimes and lies?

Highly unlikely. Wallace will be out of the country as soon as he even thinks that he is being investigated. Last I heard, people who develop Ponzi Schemes are likely to be indicted for fraud, but then again, I look for him to run.