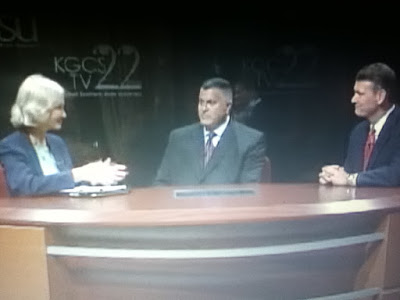 That story differs from the one Wallace told Newsmakers interviewer Judy Stiles on October 24, 2012. That interview, portions of which were featured in my book, Silver Lining in a Funnel Cloud: Greed, Corruption, and the Joplin Tornado, Wallace indicates that he met with O'Brian, former City Manager Mark Rohr, City Councilman Mike Woolston, and Chamber employee Gary Box on the first day he arrived in Joplin. Wallace put that date at about a month after the tornado.

Wallace's relationship will all four men was investigated both by the state auditors and by Osage Beach attorney Thomas Loraine.

The following excerpt is taken from Silver Lining:


A month had passed since Chris Crossland had received the telephone call at the International Conference of Shopping Centers in Dallas telling him that his mother’s home had been hit by the tornado.

Crossland was once again in Dallas and was having dinner with David Wallace of Wallace-Bajjali Development Partners. “We were talking about the master developer role we have in Amarillo and Waco and I mentioned that Waco had been affected by a tornado back in 1953, the 11th worst tornado in American history and we were redeveloping the downtown area.”

According to Wallace, Crossland asked, “Have you ever thought about helping the citizens of Joplin?”

“That was on a Thursday night,” Wallace said, “Monday, we were here.”

On that day, Wallace recalls, he met with Mark Rohr, Joplin Area Chamber of Commerce President Rob O’Brian, Mayor Mike Woolston, and Gary Box of the Chamber. That meeting, he said, sparked his interest in seeing what he could do “to help out Joplin.”

Wallace said his firm used his experience in the public sector, first as a city council member and then as a three-term mayor in Sugar Land. “When we focus on a development, it’s not just bricks and mortar, it’s what we can do to assist the quality of life and what we can do to help the economic development, reduce taxes, help from a public safety perspective, not just for five years, but for the next 100 years.”

The men Wallace met with that Monday were of a like mind about what needed to happen in Joplin. The recovery could not just be in the area that was stricken by the tornado. The disaster provided an opportunity to do things the men had been pushing, for the most part unsuccessfully, for the past several years, ideas that could make Joplin a business and cultural mecca.

And David Wallace was speaking their language.

Mark Rohr knew he had found a kindred spirit.

“That was a pledge I made to Joplin citizens at the one week Moment of Silence,” Rohr said. It was not going to be just the tornado-stricken area, but “how can we rebuild so Joplin can be one of the finest cities in America.”

It was not just a matter of rebuilding Joplin, the city manager said. “We want to build something back better. We want to make it where people want to move to Joplin.”

One way to do that was to make sure there was public buy-in. Rohr and Wallace stressed the importance of public buy-in, but their method of ensuring that public buy-in was to use a method both men had used before.

Along with people like Woolston, O’Brian, and Box, the men with whom they had met on Wallace’s first day in Joplin, they gathered others who had shown in the past that they shared Rohr’s vision of what Joplin could be.

The group would eventually become known as CART, the Citizen Advisory Recovery Team. CART employed a method that was also used by Joplin Schools. They drew up their own vision, their own ideas of how Joplin should look in the future and then scheduled a series of meetings for public buy-in. Though they emphasized that they were seeking ideas during these public meetings, for the most part that was window dressing.

The plans had already been made by those who knew what was best for the city.

Despite the fact that David Wallace had been involved in conversations with city and community leaders about the Joplin rebuilding process, he was not the city’s master developer at that point. That would have to be done through a bidding process.

There was little doubt that Wallace’s firm would be selected for the position.

He had shown up in Joplin to help and he was there at all of the meetings, showing what appeared to those attending as a genuine concern for the city’s plight.

The need for someone like Wallace to oversee the rebuilding was evident from the beginning, the woman designated as head of CART, Jane Cage, said. “As we looked at the ideas of what people wanted, we realized we didn’t have the internal resources, the knowledge, and the finances to accomplish some of the items on the list. We thought it would be to our advantage to find someone who had this much bigger experience and background than anyone here had.”

Wallace began suggesting a formal partnership between his firm and the city, months before the City Council was ready to take action.

He promoted his vision of “public-private partnerships,” where Wallace-Bajjali would use his experience to seek out sources for government grants and participation in programs, as well as seeking out private investors.

If public-private partnerships are not done right, in other words, not entrusted to someone with his experience, Wallace said, they could easily collapse. “I’ve seen a lot of failed public-private partnerships. And when it’s failed, it’s because one party has tried to take advantage of the other.”
Relying considerably on recommendations from CART, with input from Wallace, the city sent out bids in December 2011 for a master developer. Six bids were received; two came nowhere near to meeting the specifications called for, specifications that unsurprisingly were a perfect fit for Wallace-Bajjali Development Partners.

In the spring of 2012, Jane Cage, Mike Woolston, City Councilwoman Trisha Raney and others went to Waco to see Wallace-Bajjali’s work firsthand and left impressed with student housing the firm had arranged for Baylor University and a warehouse district that had been converted to retail and housing.
Rohr told city officials that he had checked out Wallace-Bajjali thoroughly. This was the kind of company with the kind of expertise that could lead Joplin out of its post-apocalyptic wilderness.

On April 2, 2012, the Joplin City Council with Councilman Ben Rosenberg abstaining, passed a resolution to pursue an agreement with Wallace-Bajjali to serve as the city’s master developer.
With Wallace-Bajjali’s long record of success in Texas, how could anything go wrong?
***
Mike Woolston, by this time no longer the mayor, but still a City Council member and his fellow council member Trisha Raney along with members of the Citizen Advisory Recovery Team were impressed with their firsthand look at the accomplishments of Wallace-Bajjali, a carefully conducted tour with little digging into just how the firm’s projects came to fruition…and for that matter, if Wallace-Bajjali was responsible for those projects being completed.

When the City Council selected Wallace-Bajjali, council member Ben Rosenberg noted that Mark Rohr had provided the council with more information about Wallace-Bajjali than the other five applicants combined.

The full council was never shown the other five applications for the master developer position, including one associated with former Missouri Governor and long-time U. S. Senator Christopher “Kit” Bond.

Mark Rohr insisted that Wallace-Bajjali was exactly what the city of Joplin needed, a master developer completely in tune with the city’s needs.

“I would stake my reputation on Wallace-Bajjali,” he told the City Council.

The Council was aware of Wallace-Bajjali having some problems with the Securities and Exchange Commission, problems that led to $60,000 fines for Wallace and Bajjali, but Rohr said he had looked into the allegations and firmly believed David Wallace when he said that he had been misled by business associates.

Rohr told the council it had no need to worry about Wallace-Bajjali. The council then agreed to a five-year contract with the firm, which included a penalty of $5 million if the city should decide to terminate the contract before the end of the five-year period.

That amount would be reduced by $1 million with the passing of each year. The contract was entered into over the opposition of City Attorney Brian Head. Head had been kicked out of the negotiations with Wallace and Wallace’s attorney because of the buyout plan.

Rohr, who was not a lawyer, took over the negotiations, therefore there were no negotiations and Wallace ended up with the $5 million buyout clause.
Posted by Randy at 8:44 PM

I read your book Silver Linings, outstanding work!
This is the type of reporting Joplin needs, Thanks Mr Turner!

Since one of the conflicting statements was a sworn statement, it may be given sightly more credence, until such time as it may be disproved.

During my one and only meeting with Wallace-Bajjali which was in June 2012 and included Gary Box, Mr. Wallace stated he had first visited Joplin about a month after the tornado and had met with O'Brian, Rohr, and Woolston at that time. During this June 2012 meeting, Mr. Wallace gave every impression that he was already working on a master developer plan at the invitation of the City and the Chamber and was meeting with various citizens and organizations to see what projects were needed and what public funding sources were available. He was already talking of public-private partnerships as the core of his master development plan.

Wallace is now sitting pretty in bankruptcy court, dusting his hands, hiding behind judge bohm, grinning. BUT I hope the FBI finally has enough evidence to indict him. The investors have alerted bankruptcy court. The trustee is looking into what the nut job of Wallace was up to. He had set up a trust for his daughters. I'm wondering if he was money laundering through that trust.. Makes me wonder.