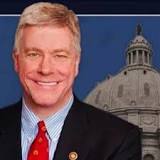 It was a sure bet that former Sen. John Danforth was not going to endorse Catherine Hanaway for governor. Now it appears that Lt. Gov. Peter Kinder may be his choice.

A 48-hour report filed today with the Missouri Ethics Commission shows that Danforth contributed $10,000 to Kinder's campaign on Tuesday.

Though no link was proven between Hanaway and a political attack ad against the late State Auditor Thomas Schweich, which may have led to Schweich's suicide, it was connected to people who were backing Hanaway's candidacy.

Whether any of the other candidates for the GOP nomination will receive any money from Danforth remains to be seen, but it is almost a certainty that he will not be giving anything to the Hanaway campaign.
Posted by Randy at 3:20 PM