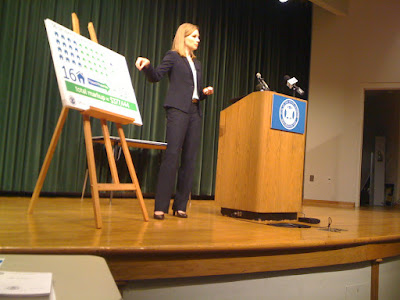 (Note: I will have my own coverage of the release of the state audit of the City of Joplin later this evening, including reporting, commentary, photos, and video, but the official news release from State Auditor Nicole Galloway is printed below.)

"I applaud the people of Joplin for requesting this audit and for their continued pursuit of the truth," Galloway said. "This audit focuses on the long-term mismanagement of public dollars in the months and years after the tornado and the need for increased accountability and transparency in the future."

After the 2011 tornado, city officials entered into master developer agreements with Wallace Bajjali Development Partners. These agreements named Wallace Bajjali as the lead developer for a series of redevelopment projects that would take place in the city. Key selection and agreement documents appeared to be written to benefit the company, and did not adequately protect the city. This, along with a failure to hold the developer accountable to the terms of the agreement, resulted in nearly $1.5 million spent by the city with no real estate redevelopment services provided.

In addition to a lack of performance, a series of property purchases related to redevelopment plans included questionable involvement by the former mayor, who acted as the broker on properties purchased by a local real estate development company. These properties, located in the redevelopment zone, were later flipped to the Joplin Redevelopment Corporation at a high markup.

"The audit finds examples of the waste and mismanagement that occur when city leaders blur the lines between private business dealings and government service," Galloway said. "This leads to a distrust in the system, and a distrust in the people who are elected to represent our own best interests."

The audit also found violations of the Missouri Sunshine Law. The Joplin City Council held at least 10 closed meetings and 10 work sessions where notes were not properly taken or provided to the public, which is prohibited by Missouri law.

"The Missouri Sunshine Law exists to ensure public business is done in view of the people, so they have a say in the actions and decisions that directly impact them," Galloway said. "Because the law was not followed, the people of Joplin lost the opportunity to understand and be involved in the redevelopment process in their own city."

"I am encouraged by the city council's responses to the audit and by their willingness to work to implement the recommendations included in the report," Galloway said. "It is my hope that the transparency provided by this audit will lead to significant improvements in the management of Joplin city government."

Because the audit includes a performance rating of "poor," Auditor Galloway's office will conduct a follow-up review. The follow-up report, which will be issued in 2016, will provide updates on key findings in the report.
Posted by Randy at 5:17 PM

On page 25 I am the JRC member; that pointed out to the JRC Chairman and all others including city Council member, Rohr and David Wallace that what they were doing was bordering on fraud. But no one would listen. I even told the Joplin Globe in a phone call to a Debbie something. It was never revealed that these concerns were relevant. It was the fox in the hen house scenario!

Dear Mr. Anonymous 7:06PM, I appreciate greatly you making the above statement, however, I think your claim would have more impact if you simply identified yourself. The citizens need to know who was working in their best interest and who was complicit in the guilt of this affair. At some point, I believe all individuals involved, including the City, Chamber, JRC, CART, WB, and others, will be held accountable for their actions, lapses, and ethical failures. Best to get it out on the table now. The anger, hurt, and resentment is so great in this community right now that I am troubled that those who were not complicit will simply get thrown into the same pot as those who are guilty. If your statement is true, then I thank you for attempting to make your voice heard and I hope that you will share all that you know with the appropriate authorities and be a part of helping to restore the faith of a shattered community in its leadership.

All the authorities have my emails and full disclosure. I have been asked to not identify myself at this time.