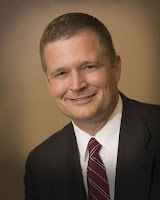 Missouri school districts took Common Core tests for the first time this year and those results of those tests will be released Tuesday.

The tests are reportedly more difficult than in previous years, at least, judging by results in other states, so it appears that departed Joplin R-8 Superintendent C. J. Huff will likely continue his streak of declining test scores, which thus far has continued through all of his years in Eldon and Joplin.

The accompanying report is from KMBC in Kansas City.
Posted by Randy at 5:41 PM

If you read more carefully, Turner was saying that the relative difficulty of these tests were unlikely to end Huff's career long losing streak. Thus the blame was placed on the tests (the very tests CJ espoused by the way).

Knowing Huff's track record for claiming and embellishing anything positive happening anywhere, would you "fault" him for trumpeting good results in the scores?

Your assumption is probably going to be incorrect. I know that the proficient/advanced rate for Algebra at JHS rose by 50%. They are way up compared to 2014.

12:23 - HS assessments did not change, as much or any, compared to the 3-8 assessments. HS EOCs have been the same format through the same company for years.