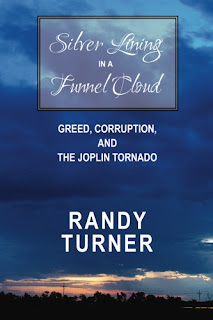 For those who have read or heard about the state audit for the City of Joplin and have seen the various ways in which people are trying to spin the information to the public, please allow me to connect the dots.

The background on what happened in the City of Joplin between May 22, 2011 and today is featured in my book, Silver Lining in a Funnel Cloud: Greed, Corruption, and the Joplin Tornado, and I will have a signing for the book a week from tomorrow, Saturday, August 29, from 1 p.m. to 3 p.m. at Always Buying Books in Joplin.

The book documents the city's dealings with Wallace-Bajjali, including the formation of CART, the role of Joplin Area Chamber of Commerce President Rob O'Brian and many of the other problems that were cited in the state audit.

The book also provides the most extensive look yet at the dealings of City Councilman Mike Woolston, and as those who have read it will attest, the words that most define Woolston were not cited in the state audit or written by investigator Thomas Loraine. Woolston's worst enemy was, and is, himself.

Copies of my other books will be available, as well, including one copy of my novel, Devil's Messenger, which has not been available in Joplin for more than two years.