Winners and losers from the state audit of City of Joplin 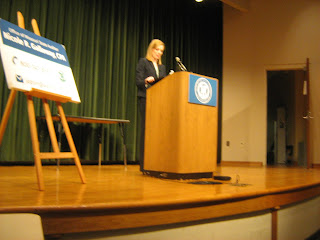 The state audit of the City of Joplin was released Tuesday night and the fallout is likely going to be felt for months and maybe even years.

A few thoughts about winners and losers from the audit:

Tom Loraine- The Osage Beach lawyer's investigation of Wallace-Bajjali and Mike Woolston was completely vindicated with the release of the audit. What Loraine was able to uncover, even without the power of subpoena was completely staggering. Let's remember how quick Mike Woolston and the Joplin Globe were to attack the report. The City Council spent too much, according to the contract, for Loraine's work, but it was well worth the money.

David Humphreys- It was the TAMKO CEO's push for this audit that enabled the level of corruption in the city to be exposed. He and the more than 5,000 who signed the petition for the audit would have undoubtedly preferred that the report would have proven that suspicions of wrongdoing were unfounded, but we are much better off knowing the truth.

David Wallace- He got out just in time and is still living high on the hog in Sugar Land, Texas, and thanks to his Chapter 7 bankruptcy appears to be on the verge of getting out of paying all of the people he cheated in the BizRadio scandal (not to mention the Joplin taxpayers).

Nicole Galloway- She managed to deliver a hard-hitting audit report in understandable fashion and even more importantly to those of us who were there, she was able to keep a straight face when Anson Burlingame defended Wallace-Bajjali.

Rob O'Brian- Not only did the Joplin Area Chamber of Commerce president come into criticism for his role in the hiring of Wallace-Bajjali as master developer, but he deleted a critical e-mail in which Wallace initially suggested the city should hire a master developer.


Mike Woolston- It can't be easy to sit in front of everyone and listen for nearly a half hour while the state auditor does everything but call you a crook. It will be interesting to see how Woolston responds to the audit. When the Loraine Report was issued, he was highly critical and this one goes several steps beyond the Loraine Report.

Joplin Globe- I will write more about this later (Does that surprise anyone?)  The Globe has done no investigative reporting and much of what was revealed in the audit could have been discovered by reporters long ago. The conduct of the area's newspaper of record since the Joplin Tornado has been atrocious. At a time when the taxpayers desperately needed the Globe to serve as the public's watchdog, the newspaper of Publisher Michael Beatty and Editor Carol Stark was missing in action.

CART- The revelation that CART members paved the path for Wallace-Bajjali to become master developer is not news to anyone who has read Silver Lining in a Funnel Cloud (and please feel free to do so), but it has become apparent that all of the laurels that were sent Jane Cage's way were misplaced.

Mayor Michael Seibert-  He doesn't remember why he gave Wallace-Bajjali much higher scores than experienced, competent companies when CART made its choice to recommend the firm?

Joplin Taxpayers- What a mess!

Mark Rohr- His name was not mentioned in the report, but much of what was included in it was an indictment of his conduct of the public portion of the tornado recovery and I have no doubt his name will be brought into this sooner or later.
***
How did the City of Joplin get into the predicament that was outlined by the state auditor Tuesday night? You can find much more information on Wallace-Bajjali, Mike Woolston, CART, the Joplin Area Chamber of Commerce and others in my book Silver Lining in a Funnel Cloud: Greed, Corruption, and the Joplin Tornado. A signing for the book will be held 1 to 3 p.m. Saturday, August 29, at Always Buying Books. Copies of the book are on sale there and at Changing Hands Book Shoppe and the Book Guy in Joplin, and at Pat's Books in Carthage. The book is available in paperback and e-book formats from Amazon.com.

Other winners "the Gang of Five" that voted to fire Rohr. Vindication is what they deserve after all the flack they took.

I hope and PRAY that the Chamber board votes to REMOVE Rob O'Brian IMMEDIATELY. There is NO excuse for what this so called man did. He is as much a crook as Woolston. He needs to go and I hope once and for all that the citizens of Joplin demand change in all faucets of who represents their city.

Thanks to David Humphreys for getting this done. Another big thanks to Nicole Galloway and the auditor's office. Ms. Galloway's presentation was informative and easy to understand. I wondered who the gasbag was defending Wallace. Just confirmed what an pompous boob that man is. The mayor with his nose in the air should be recalled as well as Mr. Woolston. I'm so incensed that after all these investigations, they won't admit any errors were made or the need to correct mistakes. After, in effect, scamming some property owners in the tornado zone, I hope Woolston's career in city government and real estate are over. If Mr. Woolston is such an "honorable" man, he should immediately resign from the council. I hope there is enough evidence to rescind Mr. Woolston's real estate license. Jane Cage is not as smart as the Joplin clique wants you to believe. She should never have been made chairperson of anything. Apparently, all it took with her was for Wallace to flatter her ego and she caved. Ms. Cage was always front an center to receive an award for her incompetence but has since receded into the shadows. I also want an overhaul of city personnel, starting with Leslie Haase. From the mess with the trash service billing, the additional tax she supported on customers at the mall, to her endless support of TIFs, to the failure to submit grant and insurance claims in a timely manner, she needs to go. The city should immediately re-evaluate their relationship with the JACC. What exactly has Rob O'Brian done for city business, aside from award/congratulatory dinners - not much. His peevishness after the meeting was very insightful. I hope businesses withdraw from the JACC until new leadership is in place. The Joplin Globe - what a waste! Sam Anselm I wish you luck. You've got a mountain of clean-up to do.

wonder if Four State Homes is under investigation by the authorities as well? Maybe he should lose his business licenses in Joplin??

Hey Anson, tell us again how corrupt Detroit is with its democratic leaders and all.

Randy Turner is not the only party who's committing blatant acts of journalism. Jordan Aubey of Fox14 has the best short roundup I've come across, better than the AP wire, "Missouri state auditor issues scathing report of Joplin's dealings with Wallace Bajjali". Looks like he read it in detail while or after Randy was doing shoe leather reporting at the presentation.

Among other things, he points out Wallace-Bajjali, hired to be the master planers for the tornado recovery, never got around to submitting a master plan to the city.

I continue to think they weren't hired to be master planners at all, but were hired to do things like provide a smokescreen while city councilman and "Tornado Mayor" Woolston and his cronies took advantage of people who's lives had been wrecked to flip their properties for a 39% markup. Nice work if you can get it.

I wouldn't call David Wallace a WINNER, nor Costa Bajjali his co-conspirator. They are both is in big trouble. The Trustee in the bankruptcy case is evaluating Wallace financial affairs, including a trust he established for his two daughters. To this day he's paying one of the daughter's car payments. She must be a loser or why would crook daddy pay her bills? The Trustee is being informed by the stakeholders in Houston and "others" of Wallace's fraud. I wouldn't be surprised if Bajjali is throwing the frying pan at him too since he betrayed him. So the Trustee is in the middle of gathering additional background information about Wallace that is not apparent from looking at his bankruptcy schedule. Keep enjoying the popcorn because this crook is going down. Now if there are indictments, that's even better. Another point, the Trustee is asking for all kinds of documents from Wallace. Lets see how this crook gets off this one.

dont forget tag as loser the "Joplin Progress Committee" that has attempted to control the city council and R8 School Board.
Randy: how about naming their names?

The Auditor's presentation is now online (https://www.youtube.com/watch?v=oDKRenohuFM). It is even more damning than the written word.

Randy, Rob O'Brien's terse comments to KOAM led to believe he was blindsided by what was in the audit. Do you know if the key players outside the government (he and Jane Cage) got a briefing beforehand as did the Council? I know the Council got this in closed session, meaning it wasn't supposed to get out, but it's hard to imagine that one of O'Brien's allies on the Council wouldn't give him a heads-up ("FYI, Rob, it's bad.") The subpoena for documents and the likely tone of the auditor's questions should have been a warning as well.

Since Missouri wants to drug test welfare recipients, lets start with these cheats.

There is a video where Rohr states" I will stake my reputation on David Wallace". I think it was at a council meeting. It is time to hold him to that statement.

He needs to find his way out of Joplin that's for sure. Rob & JACC what a waste of money & resources. You have to be in the "In crowd" to get anywhere or anything out of it.

He should be. For him to be the role model / example of The HBA, the president and awarded "Builder of the year" I think I would be asking for the award back. And is it me or has Four State Homes built back about 50% or more of the commercial projects in Joplin since the tornado. Pretty sure we can all connect the dots and figure out how and why.

I think Anson truly wants the best for Joplin. Give him a chance to turn things around.