Kinder: Nixon is the opposite of Truman; the buck never stops here 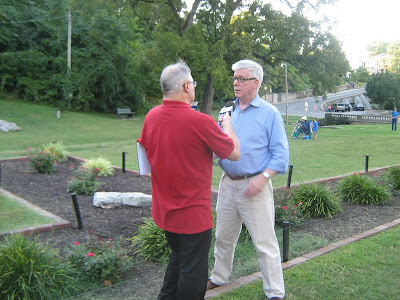 When riots were ripping apart the city of Ferguson one year ago, Gov. Jay Nixon received heavy criticism for not taking charge of the situation, or for that matter, not even going to Ferguson for the first few days.

At one point, while the attention of the nation and the world was focused on Ferguson, Nixon was receiving a guided tour of the new Joplin High School building from Superintendent C. J. Huff.

A year has passed but Nixon once again has not been in Ferguson. And once again, the governor was in southwest Missouri ,this time in Neosho to make the announcement that Neosho and Newton County have been declared a work-ready community.

"It's a disgrace," Lt. Gov. Peter Kinder told the Turner Report earlier this evening. Kinder, who is running for governor compared Nixon to President Harry S Truman, but it was not a favorable comparison.

"He's the opposite of Harry S Truman," Kinder said. "With Truman, it was the buck stops here; with Nixon the buck never stops here."

Kinder, who announced his candidacy in Ferguson, noted that 367 days have passed since the shooting of Michael Brown  "He (Nixon) has not spoken to the mayor of Ferguson and the mayor can't get a call returned."

Kinder, who was in Neosho tonight for the annual Newton County Republican Watermelon Feed, talked about his decision to run for the state's top job after three four-year terms as lieutenant governor.

He almost pulled the trigger on a campaign four years ago. "I have more experience and I have learned some things," Kinder said. Among those things are resilience, bouncing back, "and being able to take a punch."

The polls have also been favorable to Kinder in the early going. With the name recognition he has garnered from being a statewide office holder, Kinder was number one on a poll released by a Democratic leaning pollster this week, but the lieutenant governor also led a poll released a few weeks ago by a Republican pollster."

As the leader, he expects his opponents will soon be taking their best shots at him. "It's a contact sport," Kinder said. "I'm a big boy; I can handle it."