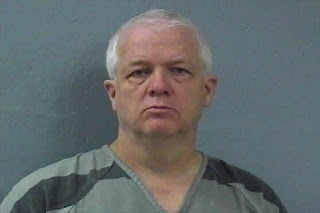 Porter's sentence is expected to be life in prison for both murders.

DNA evidence and stolen coins led the Springfield Police Department to arrest former Webb City High School Principal Mark Porter for the murders of Gary and Jan Tyrrell of Springfield, according to the probable cause affidavit:

On 5-1-2014 at 1202 hours, Sgt. Mike Lucas was dispatched to 3232 S. Greenbrier to check the well-being of the residents. The 911 caller reported she was out of state and had been unable to reach her parents, Gary Tyrrell and Jan Tyrrell, by telephone. Sgt. Lucas was unable to contact anyone at the residence, but noted the doors and windows were closed and secured.

On 5-1-2014 at 1904 hours, Springfield Police officers were dispatched back to 3232 S. Greenbrier after the original 911 caller arrived at the residence and discovered both of her parents' cars were present and no one would answer the door. The called requested the police respond because she was afraid something had happened to her parents and she did not want to enter the residence.

On 5-1-2014, I conducted an interview with the 911 caller and daughter of Gary and Jan, Jessica Tyrrell. Jessica reported she last spoke with her mother by telephone around 1500 to 1530 hours on 4-30-2014. Jessica reported her father would routinely send her a text message in the evenings to tell her goodnight. She said she did not receive this text on 4-30-2014. Jessica stated she attempted to call and text her mother and father the following day, 5-1-2014, and had been unable to reach them by cell phone or by home telephone.

Later Corporal Neil McAmis spoke with Gary's brother Larry during this investigation. Larry provided information that he had spoken to Gary by telephone on 4-30-2014 around 1900 hours after Gary finished teaching his class. I later spoke to a student from Gary's class who confirmed the class ended shortly before 1900 hours. These are the last times I can confirm someone saw or spoke with Gary.

The Springfield Police Department Homicide Response Team processed the home for evidence. The detectives did not find any signs of forced entry. The Tyrrell home was furnished with very high dollar items. These items did not appear to be touched or moved. There was a walk-in safe in the garage that had scratch marks on the door. These marks appeared as if someone had tried to break into the safe.

Detectives also found paperwork within the home which appeared to provide a partial inventory of some gold and silver items along with their possible values at different selling prices. The paperwork was located within binders that were removed from a tote bag owned by Gary. I discovered on several of the handwritten pages that someone had noted the possible value of silver coins with a face value of $1,336.60 in silver coins that would be worth approximately $22,000.

Crime scene detectives discovered a latex glove on the floor of the finished basement at 3232 S. Greenbrier during the crime scene processing. The latex glove appeared to have been turned inside out as if done during removal from the wearer's hand. The glove was located in close proximity to Jan's body. The glove was collected as evidence and subsequently examined by the Missouri State Highway Patrol Crime Laboratory. A DNA profile was developed as a result of the examination of the glove. The major component of the profile exhibited male gender characteristics and was not consistent with the DNA profiles of the victims, Gary or Jan.

In interviews with the Tyrrells' family members, I learned that Mark E. Porter was a friend of Gary's. I also learned that Porter recently asked Gary for $250,000. Gary did not loan Porter this money. The family told investigators that Mark and Gary were very close friends. Mark was one of the few people that was allowed into the Tyrrell home.

All of the evidence on scene suggests that whoever killed Gary and Jan Tyrrell knew them. There are no signs of forced entry and the Tyrrells were very careful about who they let into the home. I also learned during this investigation that Mark Porter sold $1,321.10 of face value silver coins of May 2, 2014. This amount is $15.50 less than the amount of $1,336.60 in face value silver coins documented on paperwork found in the Tyrrell home. Mark Porter received $18,531.40 when he sold the silver coins.

During the investigation, I interviewed Mark Porter. Porter stated he had known Gary and Jan for several years. Porter also told me that Gary taught a class at the Executive Center on West Battlefield on Wednesdays for William Woods University. He said the class was scheduled to start at 1730 hours and was supposed to last for four hours.

Porter said he was supposed to have met Gary on Wednesday 4-30-2014 at 2000 hours, but Gary never arrived. He reported he was supposed to meet Gary at McDonald's near Battlefield Road and 65 Highway. He told me he waited at that location from about 1945 to 2030 hours. Porter stated he did not try to call Gary but drove to Gary and Jan's house after Gary did not meet him. He said he was unable to contact anyone at the house. He reported he returned to work at the IBM offices located 3315 E. Ridgeview St., Springfield, Greene County, and worked until 2130 to 2200 hours.

The probable cause affidavit was written by Corporal Chris Barb of the Springfield Police Department.
Posted by Randy at 3:06 PM

Of all the headlines you could have used, you have to drag Webb City schools into it where he hadn't worked for how long...and it had no bearing whatsoever with the story. Is that responsible reporting? Include it at the end of the article if need be with the years he worked there, but no reason to use it for the headline.

The fact that it was a former Webb City principal was the only reason the story ran here and I found there was quite a bit of interest in it. I am sorry it offends you, but someone who held an important job committing a double murder is a legitimate news story for this area. And this happened quite a while back.