Mayor Seibert: We won't ever use a master developer again 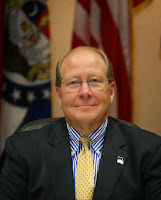 In a news conference immediately following the release of the state audit of the City of Joplin, Mayor Michael Seibert said the following things:

-He was disappointed in the "poor" rating the city received

-Good things are going on in the city.

-The city will deal with any indictments when and if they come.

If you were too stupid to realize David Wallace was a patently obvious carpet-bagging grifter when he showed up to "help" Joplin, or too corrupt to care as long as adding another player helped people like fellow council member Woolston and his cronies enrich themselves using the worst disaster in the city's history, with results like the city running out of money for normal operations, how can we have any confidence in your leadership going forward?

If you, Woolston and the other council members who presided over this debacle had the slightest shred of self-awareness and decency you would resign and withdraw from public life. Of course, if you had those traits, you wouldn't have gotten us in this mess in the first place.

David Wallace and Costa Bajjali better be indicted. They have cheated and lied so many. Took advantage or our city that needed help. Abused us and stole from us. They both need to rot in prison.

People like David Wallace and Costa Bajjali are never successful in their fraudulent schemes unless they find people in positions of power who are either stupid enough to be manipulated by the scammers, or are venal enough to be willing participants with the scammers.

It appears that Wallace Bajjali found an ample supply of both stupid and venal in the existing Joplin power structure. If the nothing changes, then the next scammers will find a similar warm reception when they arrive to loot the taxpayers and the public trust.

In my opinion the worst damage done is not the wasted tax dollars or the lost opportunities to accomplish constructive things. The worst damage is that the average person sees once again that it is easy for serial schemers like Wallace and Bajjali to make or steal money in Joplin because they easily find similarly thinking friends in high places.

It is always a wise expenditure of the taxpayer dollar to investigate, indict and prosecute illegal activities such as have been exposed. There should be bunk beds and long sentences for the perpetrators in suits just as there always are for the guys that get caught illegally scrapping.

Unless the suits go to prison and real changes are made, then the acronym to remember is probably BOHICA.