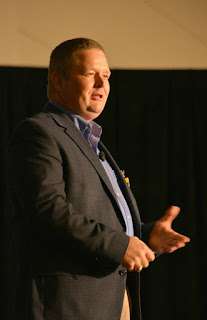 As a part of the buyout package provided to former Superintendent C. J. Huff, Joplin R-8 taxpayers are paying $862.64 for Huff's four-day stay at a Nashville hotel as he attended the 62nd annual meeting of the National School Public Relations Association (NSPRA).

Despite the fact that the district gets no value out of Huff's participation in the convention, it was one of the demands spelled out by the former superintendent, as well as paying him his salary through the end of 2016 and paying him $50,000 for "consulting," which district officials have acknowledged is mostly to help them with information for legal actions taken against the district, many of them brought about by Huff's actions.

The NSPRA website shows that Huff, who serves as the organization's vice president at large for superintendents, participated in two activities

He served as a facilitator for a discussion on how to work with parents and "instill confidence in your schools."

Huff and Kim Vann, executive director of Bright Futures USA, and a former Joplin R-8 official touted the organization during another presentation, which was described in this way on the website:

Who doesn’t want to hear that phrase coming out of the mouths of hundreds of elementary aged children? Learn how one program is helping children get to college long before they enter the doors of a high school in Joplin, Mo., while engaging an entire community who wants to help them get there. You’ll also learn how integration of social media has been key in the success of the program.

The R-8 Board of Education is scheduled to approve payment of the $862.64 bill when it meets August 25 at the Memorial Education Building. The bill notes that it is being paid "per agreement."
Posted by Randy at 5:21 AM

CJ needs to get off the Joplin teat.

In my years in education I have never heard anyone who was the Superintendent who was asked to resign was able to determine his own settlement agreement. Unheard of, and quite frankly really dumb for the Joplin School District to allow it to happen. Of course he was going to take any perk he could get and obviously went after as much of the money he could get from a school district he royally screwed...makes so much sense!

He should have been terminated.

Blame none other than Jeff Koch for allowing this to happen. This falls squarely on his shoulders. He NEVER should have agreed to this nor should he have EVER written Huff a glowing letter of recommendation.

@ 8:29
Nobody can say it any better! One hand clearly has washed the other. I'm no karma buff but in my years I've found one thing to be true.... What comes around goes around. Just saying....

As I've said before, this settlement was cheap at the price. The problem Koch and the growing "anti-Huff" school board faction faced was that the old pro-Huff majority extended his contract another year, conveniently a little before the audit came out out or the next election.

I'm not an expert on labor law, but I know there can be problems in firing someone for cause without prior warnings, and there couldn't be any until there was an anti-Huff majority on the board. It sure looks like Huff saw which way the wind was blowing after the election and decided to exit on the best terms he could make. If he hadn't, for all we know a divided board would still be fighting over him, now all he's doing is handling lawsuits resulting from his time in control of the district and continuing to get paid a little while longer for not accomplishing anything good, but he's not continuing to make things worse.

As for the "glowing letter of recommendation", anyone who doesn't spend some quality time with Google checking out the truth of his reputation, with clear markers like "retiring" with less than a month's notice, deserves what they'll get if they hire him. He certainly tried to get hired for a number of positions without success, it's clear people are onto him.

Ah, forgot to say that if people like 8:29 PM succeed in blackening Koch's reputation due to the golden parachute that was the cost of removing Huff as superintendent, Koch won't run for reelection or win, but I'm sure he'll personally view that as worth the cost. One shouldn't be too afraid about doing the right thing it looks bad to some.

Which is fine as this yammering an moaning is all Turner is able to do.