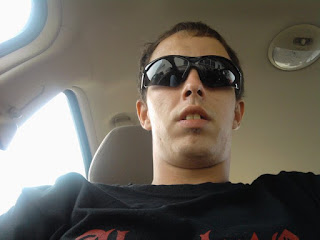 T. J. Bowman wasn't the first Diamond Middle School student I met as I prepared for my first year as a classroom teacher.

That dubious honor went to his sister, Maggie, who was a sixth grader during that 1999-2000 school year. After 22 years as a newspaper reporter and editor, I was making a midlife career change and the thought of standing in front of a classroom for the first time since I did my student teaching, also at Diamond, 18 years earlier, scared me to death. What chance was there of a a 43-year-old first time teacher being able to successfully communicate with sixth, seventh, and eighth graders?

In addition, my first room was not a traditional classroom, but a trailer situated snugly between Diamond Middle School and Diamond High School. I was preparing my room when I heard someone climbing the steps into the trailer.

"Are you Mr. Turner?" the dark-haired girl asked. I told her I was. She had just been in the middle school office picking up her class schedule.

"I have you for CLA first hour," she said, quickly adding, "What's CLA?"

"Creative Language Arts," I answered. It was probably the only question she could have asked me that I could have answered. She introduced herself as Maggie Bowman and over the next 15 minutes, Maggie was kind enough to tell me all I would need to know to teach sixth graders when classes opened two days later.

As we were talking, I heard a stomping sound, as someone leaped onto the steps and then flung the door open. "Maggie, Mom's ready to go!" the newcomer shouted. It was my first introduction to. T. J. Bowman.

Maggie told T. J. who I was and T. J. noted that he had me for T. A. and for my third hour CLA class. And then T. J. started telling me everything I would have to do to have a good year, letting me know during the course of the conversation that he really didn't care much for writing, but he was sure he would enjoy my class anyway.

Another 20 minutes passed since T. J. had told Maggie their mom was ready to go. At that point, I met a third member of the Bowman family as their mother passed along the message herself.

As I cleared the cobwebs from my mind I realized that the kids of 1999 were not much different than those who had graced my classes during my student teaching nearly two decades earlier.

Since that time, I have associated T. J. Bowman and his family with good memories, the first of what turned out to be a memorable year and a clear indication that my switch from journalism to classroom teaching had not been a mistake.

T. J.'s initial prediction that he would enjoy my class proved to be accurate. He had a great deal of fun and though writing was never his favorite thing, he turned out to be far better at it than he had thought possible.

He was always one of the students who found their way to the trailer before school every day to talk, and occasionally, to do homework. At lunch time, he was among a group of students who came to the trailer to eat their lunches and watch Andy Griffith reruns on Channel 12, the only station my TV could receive.

One of his proudest moments came during the second semester when one of his writing assignments, a short story, made the Writers Wall of Fame and hung in my classroom for everyone to see. "It wasn't that good," he said, with uncharacteristic modesty, but I noticed that there were few classmates or friends who did not receive the grand tour the next few days, with that tour stopping and ending with his Wall of Fame paper.

While discipline was not my strongest suit during that initial year of teaching, my biggest problem was keeping students from writing messages on the poles in the middle of the trailer. Thankfully, most of them were clean and when they weren't, the black markers were called to duty. T. J. was one of those who always volunteered to mark out those messages.

"Why do you always want to do that?" I asked him.

That first year went by quickly and soon May 2000 rolled around.

At the end of each hour, students told me to take a look at the poles. I don't know when they did it, but on that last day, nearly every inch of uncovered space was filled with brand new messages, but this time all of them were the type you would find in the pages of yearbooks, messages to people you might not see again for three months...people you might never see again.

Those wonderful memories came flooding back to me this morning when I learned that T. J. Bowman, only 30, had been killed in an accident near Diamond.

I remembered the message he scrawled on that pole nearly 16 years ago. "Have a good summer, Mr. T. Bet you won't miss me."

It's hard when we lose one of our kids.

And this is the reason you still remain both of our favorite teacher Mr T...i had forgotten all of that. Unlike alot of the teachers there you actually cared for us and you treated us with fairness and respect and connected with us especially with all your korny jokes. Thank you for this.
-Maggie

You were a great teacher I enjoyed it so much. T.J. was the best he will be missed dearly

He will be missed forever and always he had a lot of ppl that loved him. Prayers for every one

Rip TJ you will be missed!

How very kind and appreciated this story is. Thank you.

My name is Jeremy. Thank you for writing this. I was one of TJ's closest friends; we met at Diamond in 5th grade. Along with our friend Jason, we were the terrible 3. We were more like brothers. 18 years I spent with TJ. We shoved a lot of life into those 18 years. Tom, Deb, and Maggie were like a second family to me. I went to the cross we made for TJ last night, with Jason, and just stood there.

My heart is broken for TJ and his family. I'm looking forward to the day I get to see him again.

Thank you, Mr. Turner, for honoring my fallen brother.

Thank you for writing this. I was one of TJ's closest friends; we met at Diamond in 5th grade. Along with our friend Jason, we were the terrible 3. We were more like brothers. 18 years I spent with TJ. We shoved a lot of life into those 18 years. Tom, Deb, and Maggie were like a second family to me. I went to the cross we made for TJ last night, with Jason, and just stood there, looking at these two pieces of wood. I hope I see you again soon, bro. Life just isn't the same knowing your not here.