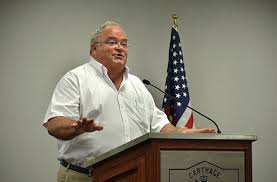 A law firm that specializes in outsourcing American jobs was among those who contributed to Billy Long's re-election campaign, according to his quarterly report filed January 30 with the Federal Election Commission.

Hunton & Williams, based in Richmond, Virginia, gave $1,000 to Long, the third time in the past four years that the firm has donated that amount to the Seventh District Congressman.

Hunton & Williams has a team of 40 lawyers which works with companies to help them outsource jobs, according to the company's Wikipedia entry:

Hunton & Williams has over 40 lawyers regularly allocated to working for the outsourcing industry, utilizing resources from the network of 800 other lawyers in the firm and prides themselves as having "over the past two decades, our attorneys have executed hundreds of outsourcing transactions worldwide valued at billions of dollars."[2] In acknowledgement of the law firms efforts, Hunton & Williams was listed by the International Association of Outsourcing Professionals (IAOP) as one of the "2012 World's Best Outsourcing Advisors", who "navigate" and arrange the organization of those businesses overseas for clients.[2]

In addition, the practice was ranked the #1 and #3 Outsourcing and Offshoring Legal Advisor in Brown & Wilson's Black Book of Outsourcing for the years 2008 and 2009.

In this Hunton & Williams blog, the writer offers the "Top 10 Considerations in Offshore Outsourcing, including the possible backlash companies may receive for costing American workers jobs by sending them overseas:

When outsourcing work offshore, organizations should consider the potential backlash at home. Offshoring is a very controversial issue, and organizations could face boycotts and scrutiny if they choose to outsource jobs overseas.

Of course, if the companies still want to cost American workers their jobs, Hunton & Williams are there to help them.

And Hunton & Williams is also there to help Billy Long.
Posted by Randy at 9:36 AM

Wow...like I needed another reason to dislike Billy.

That thousand dollars would not even see Billy Long through one evening of steaks and bourbon.

Sending American jobs overseas is honest work, unlike importing boxes of Chinese nails labeled as being made in Mexico. I've already made my thoughts clear on all that.

I'm thinking about getting weighed before the summer hog roast season. The lack of building codes and lots of cheap nails and deck screws being used these last few years has me losing some sleep. Maybe someone can get some cinderblock and do some testing just in case there's a need for some bailing wire before the fundraisers.

In the meantime an ounce of prevention means I won't take any chances. I'm sticking to Vegas and the good ol DC as much as possible.

Mr. Billy, Mr. Billy, lay down your sweet head and take the nectar from thy lobbyist to make thy warm bed!

Can we see Billy Long's expenses? It would be revealing!