Donald Trump was awful- Winners and losers from tonight's debate 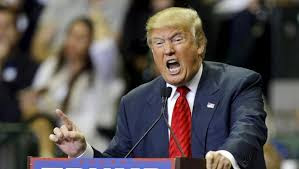 I have never tried to argue with those who think Donald Trump would make a great president.

It can't be done. Those who fervently believe Trump is the one for the job will not listen to any logical argument against Trump and the things he has said.

For instance, Mexico is not going to pay to build a wall along the border.

We are never going to be able to deport 11 1/2 million illegals.

The ratings-obsessed media has created the Trump phenomenon because they are willing to offer him four or five times as much coverage as they have offered other candidates.

Meanwhile, Trump has continued to maintain the center position at each debate at a time when a dozen candidates who were far more qualified than Trump to serve as commander-in-chief are no longer in the race.

Trump insults women, the disabled, John McCain and, with the complicity of the media, has turned the Republican presidential race into just another reality show and a perversion of our political system.

Tonight, Trump topped himself and gave his worst debate performance yet.  He called former President George W. Bush a liar, laid the blame for 9-11 at the former president's feet, rudely interrupted other candidates, primarily Jeb Bush, brought up his own support of eminent domain, argued with the crowd, and praised Planned Parenthood (though not the part that is connected to abortion).

The way things have gone thus far, Trump could see his ratings soar.

I am sensing that things have been changing and will continue to change for Trump. He is not going anywhere any time soon, but he is creating openings for his opponents.

Marco Rubio- Rubio recovered from his horrible robotic performance in last Saturday night's debate and had his best moments with an off-the-cuff one-liner after Ted Cruz talked about comments Rubio made on a Spanish language network. Rubio noted that Cruz does not even speak Spanish. But Rubio's best moment came when it was he, not Jeb Bush, who offered the best defense of President George W. Bush by saying he thanked God it was George W. Bush and not Al Gore who was president on 9-11.

Jeb Bush-  Bush has made it his mission to knock down Trump a peg or two and after some poor attempts at it in earlier debates, he has been effective at it during the last three. Bush brought out the worst in Trump as the businessman shouted, interrupted, and made a fool of himself during a sizable portion of the evening. Bush is still not a smooth debater by any stretch of the imagination, but he is no longer the punch line of everyone's jokes about this race.

John Kasich- Kasich did not help himself a bit in South Carolina, but he continues to play the adult role in the debates, and is putting himself in a solid position in future states. If enough candidates remain in the race, Kasich could make a late run for delegates, and if nothing else, Kasich is putting himself  in a good position for the vice presidential nomination.

Ted Cruz- I know. This is another candidate whose supporters cannot stomach any criticisms, but this is supposed to be the best debater among the Republicans and after some early strong performances, he has disappeared into the woodwork. He was able to land some blows on Trump, but he came off badly in his exchanges with Rubio.

It was a train wreck, from start to finish. The only positive thing that happened was that they all made it to their podiums without guide dogs.

Well Randy the truth comes out. You are a supporter of the Establishment GOP.You do remember how they lied to the people in 2012 when they said elect us and we'll stop Obama and they didn't do crap. I guess we'll see how fast they bow to Obama and put a Muslim on the Supreme Court. Now I'm glad I don't subcribe.

I didn't realize Obama was nominating a muslim to the Supreme Court, source?

"Obviously the war in Iraq was a big, fat mistake, all right?” said Trump. "George Bush made a mistake, we can make mistakes. But that one was a beauty."

Yeah, you can smell the fear.

He has said in the past that for the SCOTUS to be a fair representation of the American public an Islamic judge to be appointed.

Moments ago CNN broke the new that President Obama has declared that he WILL put forward a Supreme Court nomination. At this writing no timeline is known. Some analysts are saying that the likely nominee will be federal Judge Sri Srinivasan, age 48, whose nomination to the United States Court of Appeals for the District of Columbia Circuit was approved by the Senate by a 97-0 vote in April 2013.

Since education is a hot topic here is a recent Washington Post article.

The education mess in Ohio under Gov. John Kasich

What does that mess look like? Issues confronting public education in Ohio include:

*a scandal-ridden charter school sector
*budget cuts for traditional public schools at the same time as increased funding for charter schools and school vouchers
*controversial state takeovers of “failing” schools
*a questionable teacher evaluation system that uses as one factor the standardized test scores of students, against the recommendation of assessment experts
*the botched administration of the Common Core test known as PARCC (which the state later dropped).

Randy is a Hillary Democrat said...

The only interesting candidates on either the Democrat and Republican tickets are the non-Establishment candidates, and The Donald is by far the most honest and fascinating.

Listening to the "low-t" Jeb! whine about how his idiot father and brother started three unnecessary wars and now the Repub Establishment candidates want to fight two or three new wars against Russia or Iran or China when they couldn't whup ten-thousand goat-herders in Iraq and Afghanistan means that none of them are able to learn from the strategic disasters of the past decade. They are under the delusion that it is 2003 all over again, and they haven't lost 5,000 dead, 50,000 messed up and $4-6 trillion wasted and the American public is tired of these never-ending wars.

Both Jeb! and Hillary "think" that if they only will arm "their 'good' Muslim terrorists" then the "good Muslim terrorists" will be all grateful and after they overthrow Khadaffy and Assad that they will be nice good terrorists and give back the weapons they were given to overthrow their Dictator. Of course it doesn't ever work that way and then when "our Muslim terrorists" get all unruly and kill ambassadorks who gave them the guns and missiles in the first place, well, dead men and private e-mail servers tell no tales.

But you do serve a purpose, Turner. I read your blatherings and laugh. You are nothing if not foolish and delusional.

Sri Srinivasan is not a muslim. Your bigotry is misplaced...

Yeah and Obama is not a Muslim either.

Trump is certainly no Reagan.

You're about eight hours too late for name calling, @ 6:28 am called Randy an "establishment GOP", now you're just "Johnny come lately" with your "Randy is a Hillary Democrat" smothers your label has been denied. Thank you for your submission.